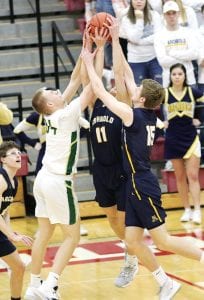 Archbold seniors Elijah Zimmerman (11) and Ethan Hagans (15) battle Evergreen senior Nate Brighton for a rebound in the Div. III district championship game, Saturday, March 7, at Toledo Central Catholic High School. The Vikings advanced to the regional tournament in Bowling Green for the first time since 2007 with a 42-39 victory.– photo by Mary Huber

“All I can say is, we were pleased that we gave everything we had. It was not good enough today, but these guys will always be winners in my mind,” said Joe Frank, AHS head coach.

“I couldn’t be any more proud of a group of young men. We’ve had a lot of adversity this year with injuries and illness and we fought through those things.

“They exceeded everybody’s expectation except our league coaches, who said we were supposed to win the league when we graduate four of our five starters and 80% of our offense (last year).

“In my mind this team overachieved. We won 18 games playing the toughest schedule, in my opinion, that we’ve ever played.

“Twelve teams that we played of the 22 were in the district tournament, and that speaks volumes about the schedule we played.”

Much like the regular-season contest between these Northwest Ohio Athletic League foes, neither team could pull away.

Evergreen held an early 8-6 lead after a pair of threepointers by Mason Loeffler, a First Team All-Northwest District selection, and a deuce by Evan Lumbrezer.

Alex Roth hit a three with four seconds left in the period to close the Streaks within one, 13-12.

Then Loeffler heaved a buzzer-beater from beyond the half-court line that saw nothing but net, giving Evergreen a four-point lead instead, 16-12.

Archbold made its move in the second quarter.

Evergreen scored a traditional three-pointer to open the period for a 19-12 advantage, but Archbold finished the half with a 10-2 run to go into the locker room on top, 22-21.

After an Evergreen timeout, Loeffler and Nate Brighton scored the final six points of the quarter with a traditional three and a three-pointer to pull the Vikings within three, 30-27 with eight minutes left.

Brighton opened the fourth with a bucket off a rebound. Austin Roth answered with a three to push the difference to 33-29.

Brighton scored again, but Hagans answered with a pair of free throws.

A Loeffler three pulled the Vikings to within one, 35-34, and two Brighton free throws gave them their first lead of the second half, 36-35.

After a rebound bounced to Loeffler, he raced down the court and brought the Evergreen crowd to their feet with a slam dunk to stand on top, 38-35, with 2:55 remaining.

Hagans finally ended a four-minute scoring drought with a backdoor layup to trail 38-37 with 1:16 left.

The Vikings allowed Noah Gomez to score on an uncontested layup to pull AHS within one, 40-39, with 13 seconds on the clock.

The Streaks intentionally fouled Brighton with 10.2 seconds left. Because it was Archbold’s 10th team foul, the EHS senior shot two free throws and made both.

“We came out tonight and we said lay it on the line and do the very best you can,” said Frank.

“We put a game plan together, and they went out and they executed it as well as they possibly could. It just wasn’t meant to be.

“The game plan was to play a zone (defense), keep the ball out of the paint, and make them shoot from the outside.

“We did what we wanted to do in terms of where they scored most of their points, which was outside.

“Sometimes you just say, you know what? Maybe it’s just not meant to be. Our guys fought to the very end, and as a coach, you couldn’t ask for any more than that.

“I had a group of guys who were ‘team first’ guys all year long. They were one of the most fun group of guys I’ve ever coached, because all they cared about was the team and winning, and that’s refreshing as a coach.”

Loeffler and Brighton led Evergreen with 22 and 13, respectively.

For seniors Zimmerman, Hagans and Noah Cheney, it was an emotional ending to an amazing high school career.

“Obviously it’s gonna be tough to say goodbye to Elijah,” said Frank. “A threeyear player, he’s been our leader on the floor all year long– leading scorer and rebounder– and he’s gonna leave a big void behind.

“He’s a high-character guy, and that’s just the kind of person you want as an example leading the team.

“Ethan, same thing; a high-character guy who worked his tail off and did a lot of the dirty work. Accepting a role as a senior is not very easy, but he did that and he played it very well.

“Noah– when he played for us, (he) did everything in his power to win.

“Unfortunately, his season ended with that ACL injury.

“I’m thankful for all our guys, but we are really gonna miss those seniors. This is what high school is all about. They graduate and they move on.

“Those guys will all be tremendously successful as they move on from high school because they’re high-character guys.”