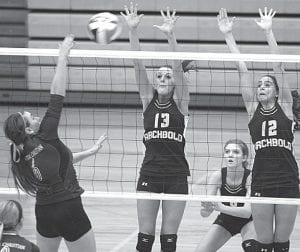 Rachel Brader (13) and Cayla Walker (12) attempt to block a Kidron spiker in the Streak Spiketacular, Saturday, Sept. 29. Archbold earned at least a share of its 22nd NWOAL title with an Oct. 4 victory at Evergreen.– photo by Mary Huber

The Streaks, 7-0 in the NWOAL and ranked 10th in Division III in the Ohio High School Volleyball Coaches Association state poll, were scheduled to play Bryan last night, Tuesday, for the outright championship, which would be Archbold’s 20th.

The Golden Bears are 6- 1 in the league after losing to Patrick Henry last week. They haven’t played for a league title since 1991.

“It is always an accomplishment to win the league,” said Kylie Rufenacht, AHS head coach.

“Knowing that Archbold has won the league 22 times says a lot about the great tradition of the Archbold volleyball program. These girls worked hard this year, and I am very proud of them and their accomplishments.”

Taylor Coressel had 18 assists while Desi Newman had 14 and three solo blocks.

“It was definitely a defensive battle,” said Rufenacht.

“Evergreen did not let many balls hit the floor, and their libero covered the floor well. We were able to make some adjustments, and the girls really responded well to find the momentum we needed to finish strong.”

The Streaks hosted a trimatch with Rossford and Start, Saturday, Oct. 6, and defeated both in two games.

AHS had 26 kills against Rossford. Lehman again led the Streaks with nine, followed by Gerig with five and Oberlin with four. Newman and Walker each had three, and Rachel Brader had two.

Lehman and Oberlin each had six kills against Start, while Newman had three. Gerig and Paige Peterson each had two; Walker and Brader each had one.