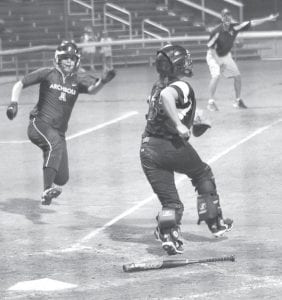 Alyssa Schaub scores on a Sarah Wyse single up the middle. The sixth-inning run closed the gap to 3-2 in Archbold’s Div. III state semifinal with West Liberty-Salem, Friday, June 4, in Akron.– photo by Mary Huber

Archbold fought West Liberty Salem down to the final out before dropping a tough 3-2 decision in a Division III state softball semifinal, Friday, June 4, at Akron.

The game was played under the lights at 8 p.m. Originally scheduled for 5:30 p.m., heavy rain on Thursday forced the postponement of one of the Div. I semifinals to Friday, which pushed Friday’s schedule back by 2 1/2 hours.

The Streaks fought an uphill battle the entire game. The Tigers (27-3) jumped out to a 2-0 lead in the top of the first inning after two errors and a two-out double by Becka Peterson.

“That was our game plan– to put a couple of runs up on the board,” said Lanay Detwiler, WLS head coach.

Getting the two runs early “was definitely big. An intimidation factor,” said Peterson, who took over on the mound for Alyssa Neff in the sixth inning.

The Tigers added to their margin by scoring a single run in the fourth on a double and a single.

Centerfielder Jenna Nofziger catches a long fly ball for the second out of the fifth inning of the state semifinal game, Friday, June 4.– photo by Mary Huber

The Streaks began to chip away at the 3-0 score in the fifth inning. A one-out double by Abbey Graber was followed by a wild pitch, which moved her to third.

Devin Newman hit a sacrifi ce fly, driving in Graber and cutting the margin to 3- 1.

The Streaks tightened the game even further by scoring in the sixth. An Alyssa Schaub single was followed by a groundout, which moved her to second.

Sarah Wyse singled up the middle to drive in Schaub and cut the margin to 3-2.

Archbold threatened to tie the score in the bottom of the seventh.

Morgan Cody walked to lead off the inning. Stacy Wyse sacrifice bunted Chelsea Goebel, who was pinch running for Cody, to second.

A strikeout meant the Streaks were down to their last out, with Newman at the plate. After falling behind in the count, Newman lofted a fly ball down the left field line. 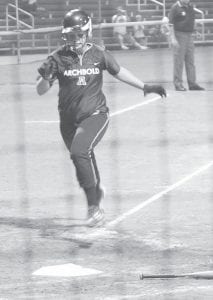 At right: Abbey Graber crosses the plate for Archbold’s first run in its Div. III state semifinal with West Liberty-Salem, Friday, June 4. Graber scored on a sacrifice fly by Devin Newman in the fifth inning. The Streaks were unable to close a three-run deficit and lost 3-2. West Liberty-Salem finished as state runner-up after losing 2-1 to Jeromesville Hillsdale in the D-III championship game, Sunday, June 6. It is Hillsdale’s sixth state championship.– photo by Mary Huber

Jordan Adams, the Tigers’ leftfielder, watched as the ball hit her glove, popped straight up in the air, and then fell back into her glove for the final out of the game.

The last catch “was really scary,” said Adams. “I about had a heart attack. But I was happy when I caught it.”

The Streaks out-hit the Tigers 5-3 with Courtney Day collecting a single and a double.

“If you’d have told me before the game started they’d get three hits, would you take that, I’d have jumped up and down and said, absolutely,” said Joe Frank, AHS head coach.

“Unfortunately, the one hit was after we had a couple of mistakes, and good teams make you pay. And that’s a very good team. That was the difference in the game.”

Sarah Wyse was the tough-luck losing pitcher. She gave up only three hits while striking out three and walking none.

Talking about her team’s determination to battle back, Sarah Wyse said, “We’ve always had trouble winning close games in the past, and we finally learned how to do that this year.

“We just came up short today.

“I wouldn’t trade anyone on my team. I’m proud of them.”

“This was a hard-fought battle between two very good teams, and unfortunately we came up short,” said Frank.

“We outplayed them after the first inning, but to their credit, they made the plays they needed to make to come up with the win.”

“I thought it was going to be caught when (Newman) hit it, then I could see she (Adams) was having a little bit of trouble with it, but to her credit, she made a play.

“And that’s what teams do that win games. That’s the difference between winning and losing a game sometimes. Give her credit. She made the play when she needed to, to get that third out for them.”

“I am very proud of this team and their accomplishments,” said Frank.

“Although this wasn’t the finish we were hoping for, we represented the school and community in a positive way throughout the regular season and our tourney run.

“They got us two trips to the regional and one trip to the state semis. It’s pretty hard to put into words what they mean and what they’ve meant to us these last three years.

“Great leaders. Great people. I told them afterwards, that’s the thing I remember most about them.

“As successful as they’ve been on the field, they’re better people off the field.

“That will take them a lot farther in life than their softball skills will, because when you have high-character people they’re going to be successful in life.

“We also have a core group returning next year that has been very successful in softball. Each one of the four returning starters (Day, Schaub, Cody, and Sarah Wyse) hit over .400 this year, so obviously the cupboard is not bare.

“Hopefully we can use this success we had this year to build on for the next season.

The Streaks finish with a 26-5 record. They were Northwest Ohio Athletic League, sectional, district, and regional champions.

The 26 victories also ties the school record for most wins in a season.