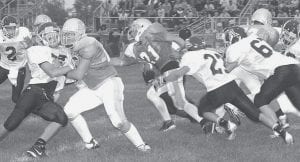 Archbold’s Trey Westrick (27) and Jarett Wyse (67) get ready to tackle Ayersville’s Jordan Wakeham (21) as the Pilot runs up the middle. Garrett Morton, AHS quarterback, passed for 177 yards and rushed for 101 as the Streaks used a 21-0 first half to propel them to a 35-6 non-league victory.- photo by Scott Schultz

It was the first football game of the 2009 season.

It was the debut of Bryan Miller, new Archbold head coach.

It was the first victory of the season. The Streaks shot down the Ayersville Pilots (0-1) 35-6 in non-league action at Ayersville.

“This victory feels really good, but it is not about me,” said Miller. “The main objective is just come out and win the football game.”

It was a night when Desmond Sleigh made his first interception of 2009. Seven plays later, Garrett Morton, the Archbold signal caller, crossed the goal line for an early 7-0 lead with 8:21 left in the first quarter.

Getting the nod as the starting quarterback, Morton had a stellar night in his varsity debut. He passed for 177 yards and rushed for 101.

“Garrett did a great job,” said Miller. “All the pressure is on him. It’s the first varsity experience he’s had, and I thought he held up well. I am proud of what he did.”

With Archbold holding a 14- 0 lead at the 3:21 mark of the second quarter, the Pilots, led by quarterback Dillon Flint, looked to narrow the gap.

Chaz Waisner picked off a Morton pass and the Pilots were flying on a 13-play drive, but Flint coughed up the ball on the Streak 5-yard line.

“When Ayersville marched down and had the fumble, they came out and did some things we hadn’t seen in the scrimmage,” said Miller.

“We were on our heels a little bit, but the defense made a play, and that was huge for us. I think that took the wind out of their sails a little bit.”

The Pilots scored late in the game when a pass by Flint caromed off a teammate into the hands of Vinnie Perez for a 25- yard touchdown reception.

“It was a team effort tonight,” said Miller. “We had some mistakes on both sides of the ball. I thought, offensively, the mistakes we made we overcame.

“The scoring drive was disappointing with the tip ball, but all in all it was a good effort on both sides of the ball.”

“Our kids played hard, and I think we out-hit Archbold,” said Chris Dales, Ayersville head coach. “Archbold got the breaks and we didn’t. They got the turnovers.

“We were in scoring position twice. It would have been a whole different ballgame if we got in.

“Our kids played their rear ends off.”