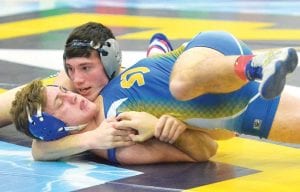 The host Streaks finished with a perfect 5-0 record for the second straight year.

Marion River Valley finished second with a 4-1 record. Wauseon was 3-2 for third.

In the championship match, the Streaks easily defeated River Valley 55-16 to claim the title.

In the first match of the day, Grime defeated Delphos St. John’s Peter Ankerman with a pin at 2:38 to record the 150th win of his high school career.

The senior two-time state qualifier is currently 30-1 on the season.

Montpelier and Evergreen wrestle in the first round. The winner faces number one seed Swanton in the second round.

Archbold, seeded third, wrestles second-seeded Delta in the second round.

Second-round winners square off in the regional quarterfinals 20 minutes after the last match of the second round concludes.