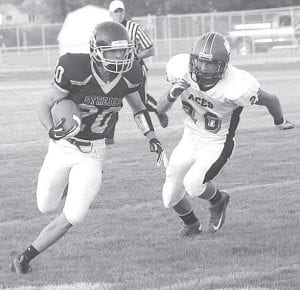 Levi Wyse (20) outruns the Hicksville defense for yardage. The sophomore had five pass receptions for 66 yards and rushed for 10 more.– photo by Scott Schultz

Archbold hosted the Hicksville Aces, Friday, Aug. 24, for a non-league football battle and slipped by 19-14 for an opening-night victory.

Taking the opening kickoff, the Aces marched right down the field on a 17-play drive with Kaleb Johns scoring from 30 yards out.

The Streaks went threeand out on their opening possession.

Johns took over again, scampering 48 yards for a 14-0 lead with 2:23 remaining in the first quarter.

Johns rushed for 123 yards on nine carries to lead all rushers for the night. The Aces totaled 235 yards on the ground to Archbold’s 128.

“The first game you want the win for the guys so bad because they have worked so hard in the summer,” said Bryan Miller, AHS head coach. “You want them to have that reward.

“Hicksville in that first half didn’t make many mistakes and played crisp, and we made mistakes.

“We told the kids not to hit the panic button; just come out and play within yourself, and that is what we did.” 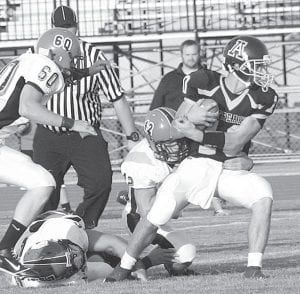 Blue Streak quarterback Evan Wyse tries to escape the grip of the Hicksville defense. The junior rushed for 106 yards and passed for 170 in Archbold’s 19-14 victory.– photo by Scott Schultz

“The game started the way we wanted it to, scoring on those first two possessions. We had a couple of chances to take a bigger lead, but had some dropped passes.

“We have to be able to make those plays. If you want to beat a team like Archbold, you have to make plays because they are so well coached and disciplined. They don’t make a lot of mistakes.”

Archbold put together a seven-play drive at the end of the first quarter to close the difference to 14-7.

AHS quarterback Evan Wyse picked up 6 yards on the ground and connected with Tyson Dietrich for 18 through the air.

Zach Belknap kicked the point-after-touchdown, and AHS was down 14-7, a score that held up through the first half.

With only 29 players listed on the Hicksville roster, AHS, with 53, wore the Aces down in the second half.

Hicksville got the ball to open the second half, but its drive stalled, forcing a punt from Shane Bostic.

Archbold closed the scoring gap when E. Wyse connected with Dietrich for 11 yards, ran for 17, and hit Dietrich for a 25-yard touchdown toss.

Belknap’s PAT was no good and the Streaks trailed 14-13 to start the final 12 minutes.

Hicksville took the ensuing kickoff and looked to have a breath of fresh air. Connor Yoder busted up the middle for 7 yards, then 6 more and a first down.

He added 3 more yards before the Aces were hit with illegal use of hands, pushing them back 5 yards to their own 30-yard line.

“They had some success with their quarterback running straight at us, but that was sort of hit and miss,” said Miller.

“The defense played tremendous, and we won the second half. That is what you have to do when you are behind.

“We will take any turnover we can get. Zach (Zimmerman) made a great play. That was a huge play that got us our touchdown, the lead, and we were able to keep it.”

With Archbold’s offense heading back on the field deep in Hicksville territory, E. Wyse broke loose for a 30- yard touchdown run.

The two-point conversion failed, but the 19-14 lead was enough to carry Archbold to a season-opening win.

E. Wyse finished with 106 yards rushing on 26 carries and two touchdowns. He completed 12-22 passes for 170 yards and one touchdown.