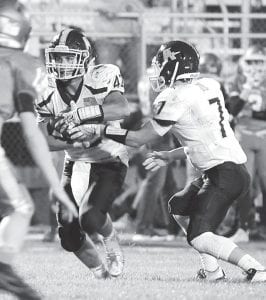 After posting an emotional win over Liberty Center to take control of the Northwest Ohio Athletic League last week, Archbold has clinched at least a share of the league title for the first time since 2010.

“You worry about that letdown and coming out flat, but we didn’t do that. We came out ready to play,” said David Dominique, AHS head coach.

“I was very proud of the way we prepared ourselves all week long, and then tonight execute the game plan.”

Liberty Center, Swanton, Wauseon, and Bryan all sit in second place at 3-2.

“In the last 27 years we’ve won two league titles. Tonight was our first step, beating Delta, and now we move on to Evergreen.

“We want to finish what we started, and that’s finishing the last two games of the year and finishing on a great note.”

The Blue Streaks scored on their first three possessions for a quick 20-0 lead.

Gabe Petersen scored the first touchdown on a 5-yard run. He tossed a 30-yard touchdown pass to Nic Rodriguez for the second score.

Archbold played on a short field most of the night. The Streaks started its third possession at its own 48.

It took only three plays to hit pay dirt on a Sam Petersen 15-yard jaunt.

Meanwhile, the Archbold defense continued to dominate, forcing Delta to punt on five of its six first-half possessions.

Rodriguez stamped an exclamation mark on the first half, taking a Panther punt and returning it 57 yards for a touchdown and a 27-0 lead at halftime.

The Streaks continued to impose their will defensively in the second half, forcing a Delta fumble to start the third quarter.

The offense took over at the Delta 49 and scored in five plays on a G. Petersen 14-yard pass to Deven Girdham for a 34-0 lead and a running clock the rest of the game.

Dominique began to insert his backup players, and Archbold scored two more times on the legs of backup quarterback Caleb Hogrefe, who had 13- and 44-yard touchdown runs to lead 48-0.

Delta scored the final points of the night against the Archbold second string defense on a Travis Dunning 2-yard plunge for the 48-7 final.

“The big thing for us was being physical up front, controlling the line of scrimmage,” said Dominique. “We did that for the most part all night long.

“We had a couple hiccups. We’ve got to get those fixed moving into the end of the year.”

Archbold had 333 yards of total offense, with 267 yards on the ground.

G. Petersen threw for 66 yards on 4-5 passing with a pair of touchdowns. He rushed for 86 yards and one touchdown.

Hogrefe had 94 yards rushing on seven carries and two touchdowns.

Rodriguez hauled in two passes for 45 yards with a touchdown.

Delta had 108 yards of total offense, with the majority coming against Archbold’s second team.

Dunning rushed for 106 yards on 17 carries with the lone Panther touchdown.