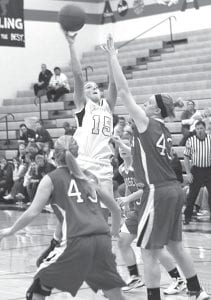 Cassidy Wyse (15) penetrates the lane for a shot over the outstretched arms of Wauseon’s Annette Stidham. Wyse led AHS with 18 points in the 54-28 Blue Streak victory.– photo by Mary Huber

Archbold jumped out to a 16-4 lead after one period on its way to a 54-28 win over Wauseon in non-league girls basketball action, Tuesday, Nov. 29.

“This was a nice team win,” said Brian Ziegler, AHS head coach. “We played together and worked very hard at the defensive end.

“I thought Mindy Rupp and Jesse Fidler did a great job on Bailey Creager.”

Creager, a senior who averaged 12 points per game last season, finished the game with four points.

“We passed the ball much better tonight and made better decisions at the offensive end,” said Ziegler.

“We cut our turnovers down from the opener with Edgerton, which was huge.”

The Streaks committed 26 turnovers against Edgerton, compared to 10 against the Indians. Wauseon (1-1) committed 24 turnovers.

“I’ve also been very happy with our play off the bench,” said Ziegler. “We’ve got a lot of girls that can play and are filling roles nicely.”

Alyssa Reed led WHS with 10 points and six of the Indians’ 20 rebounds.

Once again, Archbold took control in the first period. The Streaks led 19-5 after one period and 32-14 at halftime.

“Our defensive pressure was a big key, especially in the first quarter, which got us a big lead,” said Ziegler.

“Tonight LC played a lot of zone defensive. I thought we did a nice job passing the ball and finding an open teammate.

“We missed several shots that we had good looks at that we have been making, but we did a great job on the boards with second and third efforts.”

Short led AHS with 11 points and nine rebounds. Rupp was also in double figures, with 10 points.

The Streaks led the rebounding battle 48-21, and committed only 10 turnovers to the Tigers’ 26.