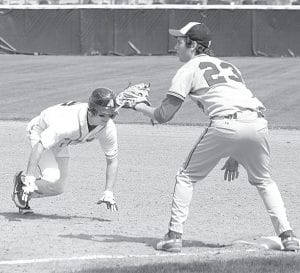 Kolin Schilt beats a throw from the pitcher and dives safely back to first base, Saturday, April 23.– photo by Scott Schultz

The Patriots, ranked fifth in Division IV by the Ohio High School Baseball Coaches Association last week, came into the contest with a 13-2, 3-0 NWOAL record.

The Patriots scored four runs in the top of the first inning and led 4-1 going into the third.

Aaron Bontrager pitched in relief of the starting pitcher in the first inning and threw six innings without giving up an earned run.

Zach Driver’s three-run home run tied the score at 4 in the bottom of the third inning. AHS then exploded for six runs in the fifth for a 10-4 lead.

PH scored two runs in the seventh, but it was not enough as the Streaks handed the Patriots their first league loss of the season, 10- 6.

Bontrager was the winning pitcher. In six innings he allowed one run on nine hits, struck out four, and walked seven.

Driver went 2-4 at the plate with a home run and four runs batted in. Kolin Schilt was 3-5 with a double and four RBIs. Bontrager was 3-4 with two RBIs, and Chandler Tuckerman was 2- 3 with one RBI.

The Bears scored two runs in the first and second innings, and single runs in the third and fourth. The Streaks crossed the plate once in the sixth and three times in the seventh before Bryan’s Cody Robinson came back in on the mound to get the final out.

Tyson Dietrich suffered the loss. In four innings he gave up six runs on five hits, struck out four, and walked three.

At the plate a trio of Streaks had two hits. Driver went 2-2; Dietrich and Ben Miller each went 2-4. Dietrich and Miller recorded one RBI and Miller, two.

Miller gave up two runs on five hits and struck out four in the 3-2 win.

Taylor Brown was the losing pitcher. In six innings he allowed three runs on three hits, struck out six, and walked six.

The Blue and Gold had just three hits, with Tuckerman going 2-2 with one RBI.

AHS led 2-0 after one but the Panthers tied the score with two runs in the second. The Streaks scored the winning run in the fourth.