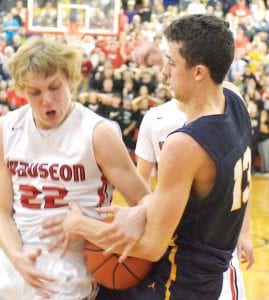 Trailing 33-29 after three quarters, Archbold used an 18-9 fourth quarter advantage to come back and defeat Wauseon 47-42 in front of a packed house, Thursday, Jan. 10, at Wauseon in boys basketball.

The Streaks remain undefeated at 10-0, 1-0 in the Northwest Ohio Athletic League.

“What it boils down to is kids making plays,” said Joe Frank, AHS head coach. “I’ve got great kids who know how to win and also know how to overcome adversity.

“We just feel fortunate to be able to survive and get out of here with the ‘W.’”

Archbold opened with a 4-0 lead on baskets by Rigo Ramos and Jeron Williams.

The Indians (7-2, 0-1, ranked fourth in Division II in the first Associated Press poll) answered with a Shawn Brock three-pointer and a pair of free throws from Trent Armstrong.

Austin Wiemken and Elijah Zimmerman gave the lead back to Archbold, 8-5, with back-to-back buckets. 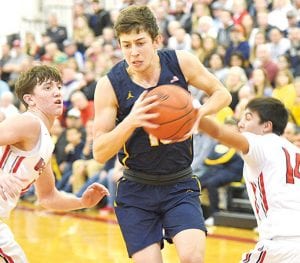 Archbold’s Jeron Williams splits a pair of Wauseon defenders on his way to the basket.– photo by Mario Gomez

Trevor Rodriguez scored to pull the Indians to within a point but Zimmerman gave AHS a 10-7 lead.

Wauseon’s Levi Seiler scored the final points of the quarter to close the gap to 10-9.

A mix of good defense and poor shooting by both teams led to a low-scoring 8-6 second period in favor of Archbold.

Williams drained a three at the end of the half for an 18-15 lead.

After Wiemken opened the third with a basket, Wauseon answered with four straight points on a Rodriguez free throw and an Armstrong three-point play to pull the Indians within a point, 20-19.

Archbold was forced to play without its leading scorer and best defender when Wiemken and Zimmerman went to the bench with three fouls each.

The Indians used the advantage to outscore Archbold 14-9 over the final six minutes of the period for a 33-29 lead with one quarter to play.

Armstrong’s layup with 6:21 remaining in the game gave the Indians their biggest lead of the game, at 37-32.

Williams drained two straight threes to regain the lead, 38-37. An Armstrong free throw tied the game at 38 with 4:43 left.

On the ensuing Blue Streak possession, Zimmerman hit a trey from the corner for a lead Archbold would not relinquish, at 41-38.

In the final three minutes of the game, the AHS defense allowed only one Wauseon field goal and a pair of free throws.

Wiemken scored four points and Ramos hit a pair of free throws down the stretch for the 47-42 final.

“I thought we executed a great defensive game plan, but there were about two or three possessions we had breakdowns, and they took advantage of it, which is what a good team is gonna do,” said Chad Burt, WHS head coach.

“They are so good defensively. They did a good job of contesting shots.”

“We hung our hat on our defense tonight and we got enough stops in the end that made the difference,” said Frank. “It’s a great win.

“There’s a long way to go in the league, but this is a great start.”

Williams had the hot hand for Archbold, scoring 19 points and draining five of the team’s eight threes.