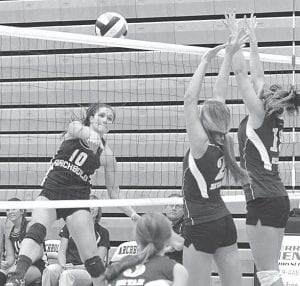 Jenny Lehman hits one of her 17 kills to help lead the Streaks over Bryan, Tuesday, Oct. 9. With the win Archbold claimed the Northwest Ohio Athletic League volleyball title outright with an 8-0 league record. It was the 22nd NWOAL title for AHS, and the 20th outright.– photo by Mario Gomez

“We wanted (the league title) outright,” said Kylie Rufenacht, AHS head coach. “We didn’t want to share any of the pie. “They were determined to go out and get it.”

After a tie at 6, Archbold took control in the first game and jumped out to a 14-9 lead.

The Streaks were ahead 18-12 when the Bears came back to within three, 18-15, behind two kills by MaKayla Dennis and a block.

Rufenacht called a timeout, but Bryan scored two more points to close within one, 18-17.

Becca Gerig’s kill stopped the Bears’ scoring streak, and they didn’t score again in the game as AHS went on to win 25-17.

The last time Bryan led in the second game was at 4-2. AHS tied the score on kills by Desi Newman and Jenny Lehman, and then Lehman gave the Streaks the lead for good with another kill.

An Archbold spiking error gave the Bears their final point of the game, as they were down 21-15. The Streaks scored the final four points for the 25-15 secondgame victory.

“Finally we got ourselves going where we’re going to anticipate that and pick up those dinks and those pushes to the deep.”

Archbold controlled the third game most of the way as the Bears couldn’t handle Archbold’s power hitters. Gerig and Lehman each finished with 17 of the team’s 51 kills as the Streaks took the game and match, 25-16.

“I was very proud of the team,” said Rufenacht. “We had practiced all week what Bryan was going to do.

“I thought our girls came out, did what they needed to do. We needed to swing. I knew that Bryan wasn’t going to handle the power we were going to bring.”

Darian Oberlin had six kills, while Newman had five. Cayla Walker and Rachel Brader each had three.

Newman had 24 assists, while Taylor Coressel had 21.