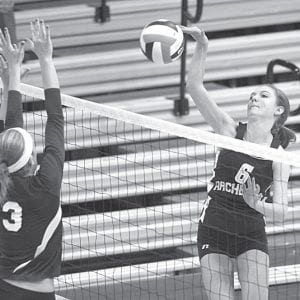 Archbold led the entire way in the first game, which ended with a Becca Gerig kill.

It looked as though the second game was going to be like the first, with AHS leading 6-1. The Streaks continued to lead until the Bulldogs tied the score at 16 with an Archbold spike into the net.

Swanton took its first lead of the contest, 17-16, when Archbold’s spike went long.

A Swanton spiking error tied the score at 17. The Bulldogs took their final lead, 18- 17, on a kill.

Archbold outscored the Bulldogs 8-2 down the final stretch, including points on kills by Jenny Lehman, Darian Oberlin, and Becca Gerig. 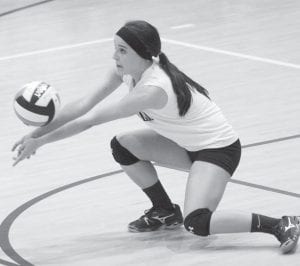 The third game stayed tight throughout as neither team led by more than three points the entire way. Archbold took its first lead at 18-17 when a Bulldog spike went into the net.

Doreen Birney, SHS head coach, called a time-out. Coming out of the huddle, Bethann Lumbrezer tied the score with a kill for Swanton.

Lehman broke the string of errors with a kill. Archbold closed to within one, 21- 20, as the Bulldogs only partially blocked a Gerig spike.

Alaura Fetterman’s kill gave the serve back to Swanton with a 22-20 lead.

Gerig’s kill gave the serve and point right back to Archbold.

Gerig’s spike went wide, and Swanton led 23-21. A Fetterman kill put the Bulldogs at game point, 24-21, but they couldn’t close out the game.

Gerig came back with a kill, a Bulldog spike went into the net, the Streaks blocked a spike, and the score was tied at 24.

Archbold got to match point, 25-24, when Swanton was called for two hits on the serve receive.

After each team scored a point for a tie at 27, Lumbrezer’s spike went long. At match point again, Lehman finished off Swanton with a kill for a 29-27 victory.

Lehman had 15 kills in the match, while Gerig and Oberlin each had 12. Desi Newman had 19 assists; Taylor Coressel had 17.

“Swanton fought hard until the end, and we made the necessary adjustments to come out on top,” said Kylie Rufenacht, AHS head coach.