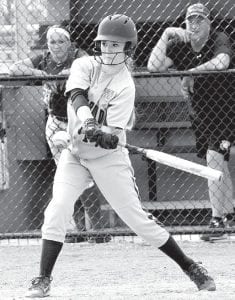 Left: McKenna Towns hits a groundout against Swanton. Right: Gabby Nafziger gets a base

The Archbold softball team defeated Swanton 10-0, lost to Napoleon 4-1, and defeated seventh-ranked Anthony Wayne 6-4 to finish off the week last week to stand 11- 4, 4-0 in the Northwest Ohio Athletic League.

The Streaks jumped out to a 6-0 lead after two innings and went on to defeat the Bulldogs 10-0, Monday, April 25, in an NWOAL contest.

Archbold had six hits in the first inning to take a 4-0 lead. The Streaks added two more runs in the fourth and one in each of the fifth and sixth innings to end the game.

Robinson got the win on the mound, pitching five innings, while Neila Kinsman pitched the sixth.

Swanton had only two hits while striking out four times. 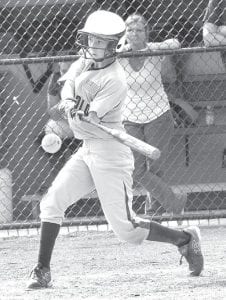 hit. The Streaks shut out the Bulldogs 10- 0.– photos by Mario Gomez

The Streaks saw their eight-game win streak come to an end with a 4-1 loss at Napoleon, Tuesday, April 26.

Missed opportunities hurt AHS while the Wildcats (6-8) put up four runs in the third inning to take control.

The Streaks had eight hits but could not come up with the big hit.

Dickman led the way at the plate, going 3-3.

Robinson was the losing pitcher.

Archbold upset the Division I seventh-ranked Generals 6-4 in a back-and-forth contest, Saturday, April 30, at Anthony Wayne.

Archbold took the lead for good in the fifth. An error and three walks led to one run while Robinson singled in the second run of the inning.

Andi Peterson came up with a key two-run single to put Archbold ahead for good.

Robinson pitched out of a couple of jams and was aided by a huge defensive play by shortstop Emie Peterson in the seventh.

With one on and no outs, Peterson dove and caught a pop-up and doubled the runner off first base.

Robinson led the way at the plate, going 3-4 while picking up the win on the mound. She struck out five and walked none.

“This was a huge win for us against a very good team,” said Joe Frank, AHS head coach.

“We can still improve our overall play, but this should give us a shot of confidence as we have some huge NWOAL games this week.”