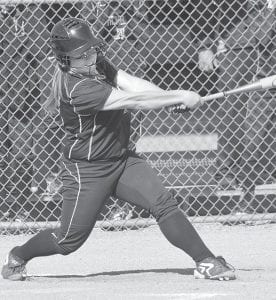 Ruthie Beck powers a double to right field in Archbold’s 21-4 NWOAL victory over Swanton, Monday, April 23. The Streaks raised their league record to 5-0 with the win.– photo by Mario Gomez

The Streaks scored in every inning in a romp over the Bulldogs (1-14), Monday, April 23.

Hannah Kern was the winning pitcher. She surrendered four runs on six hits while striking out two and walking three.

The victory raises the Streaks’ NWOAL record to 5- 0 as they seek their seventh straight title. Anthony Wayne 10, AHS 9

Archbold battled back from a five-run deficit to tie the game in the top of the top of the seventh, only to see the Generals win by scoring in the bottom of the inning in a non-league encounter.

On the mound for Archbold, Hannah Kern winds up to pitch against Swanton.– photo by Mario Gomez

Mindy Rupp doubled home Megan Gerig with two outs in the seventh to knot the score before a single, a groundout, and another single won it for Anthony Wayne.

Kern was the losing pitcher, giving up 12 hits while striking out three and walking two.

“These two games showed our coaching staff a couple of things about our team,” said Joe Frank, AHS head coach.

“Number one, we are capable of coming back from deficits.

“Number two, this team has a lot of heart.

“We have battled hard as Hannah Kern is learning about pitching at the varsity level against some good competition.

“She is gaining valuable experience and is improving each contest, although the results may not always show it.

“I am very pleased with our offense, as we have had at least nine hits in our last seven games. We are getting production all the way through the lineup, which makes us pretty dangerous.

“Our defense has been solid, and we will work hard to continue our improvement in that area.

“We have a big week ahead with two key contests that will go a long way in determining our fate in the NWOAL.”

An idea not coupled with action will never get any bigger than the brain cell it occupied.– Arnold Glasow