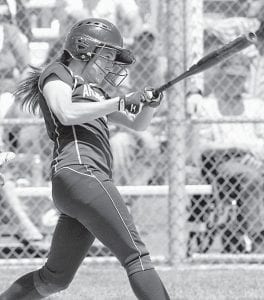 Chelsea Goebel hits a double to right field in the sixth inning of Archbold’s Div. III district final with Ottawa-Glandorf. Goebel scored on the next play when Cassidy Wyse hit a double, giving the Streaks an 8-0 lead. AHS won 9-3 to advance to the regional.– photo by Mary Huber

The Streaks advanced to the district final with a 16- 0 victory over Kenton in the district semifinals, Wednesday, May 16.

The Titans, who finished with a 17-11 record, had advanced to the district final with a 6-2 win in their semifi nals, Tuesday, May 15.

It was the first district win for the OG softball program.

The Streaks jumped out to a 10-0 lead after two innings and coasted to a five-inning 16-0 whitewashing of the Wildcats.

The Streaks pounded out 20 hits and scored in every inning.

Chelsea Goebel led AHS at the plate, going 4-4 with a double and two runs batted in. Cassidy Wyse was 3- 5 with two singles, a double, and three RBIs. Becca Gerig, Megan Gerig, Cassidy Williams, and Ruthie Beck each had two hits; B. Gerig hit her 11th home run of the season. 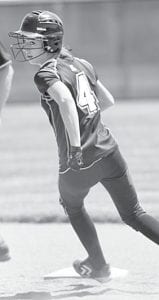 After hitting a base hit, Mindy Rupp rounds second after a OG error in the fourth inning.– photo by Mary Huber

Hanna Allison was the winning pitcher, giving up no runs on three hits while striking out five and walking three.

“We hit the ball extremely well and that was great to see,” said Joe Frank, AHS head coach.

“It takes a lot of pressure off of Hanna and our defense when we score runs in bunches. I hope we can continue to play like this.”

The Streaks broke open a scoreless contest with four runs in the third inning and went on to a 9-3 victory.

Goebel laid down a bunt, which was thrown away and allowed Gerig to score.

With one out, Allison then hit a two-run homer to make the score 4-0.

The Streaks raised the margin to 9-0 before the Titans scored three runs in the sixth to make it 9-3.

Allison was the winning pitcher, giving up three runs on six hits while striking out two and walking three.

Allison also led the way at the plate with a single, homer, and four RBIs.

Mindy Rupp chipped in with two hits as the Streaks collected five extra base hits in the contest.

AHS defeated the Vikings 6-1, Monday, April 16, in an NWOAL contest. The only other loss Evergreen incurred this season was 6-5 to Springfield.

“We are really excited about winning a district title and having the opportunity to play Evergreen again,” said Frank. “I think it will be a great game against two evenly-matched teams.

“We are playing some good softball right now, and we hopefully can continue playing well. Evergreen will present us with a great challenge and we know it will be a hotly-contested game.”

The Martins Ferry Riders defeated Claymont 3-1 in their district final, in which Cirstie Delguzzo, their pitcher, was called for three illegal pitches in the first inning, according to the Martins Ferry Times Leader.

The Edison Chargers’ only defeat this season was a 1-0 loss to unbeaten and nationally ranked Lagrange Keystone on April 3. Keystone is the top-ranked team in Div. II.

Their top pitcher, Susan Knight, has thrown 232 strikeouts this season, and is the reigning Sandusky Bay Conference Player of the Year.

The Chargers defeated New London 12-2 in their district final.

The regional championship is scheduled for Saturday, May 26, 12 p.m., at Brookside Park, Ashland.