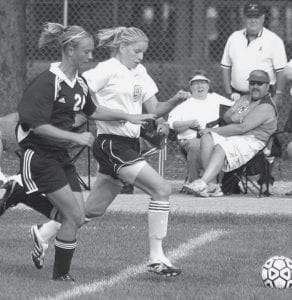 Alicia Drewes (9) battles an opponent for control of the ball in recent soccer action. The Streaks are undefeated on the season and were scheduled to begin tournament play last night, Tuesday.- photo by Scott Schultz

Kelsey Moshier had a hat trick with the help of her teammates. Alicia Drewes scored two goals. Bri Wyse added another for a 6-0 lead.

Autumn Lantz chipped in the final goal for the 7-0 victory.

“Our team’s strong and our defense is strong,” said James Kidder, AHS coach. “Our midfielders are doing their best to support the offense, and we have very good speed at the forwards. We have very good foot skills.

“We knew that we were going to be better than we were last year, but we weren’t sure how good we were. We definitely set the higher standard now, especially an undefeated season. That’s something to brag about.

“I think overall the team is healthy; fortunately we haven’t had any injuries, unlike last year. They’re really jelling well and they’re playing as a team.

“They’re peaking at the right time.” 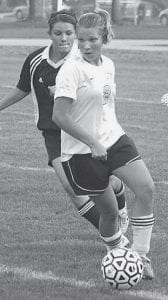 Kelsey Moshier (2) gets ready to pass the ball to a teammate.- photo by Scott Schultz