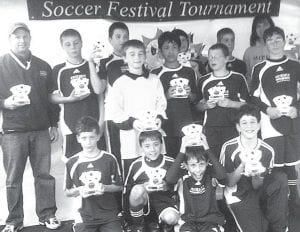 The Boys 12 and under soccer team played in the Northwest Ohio Youth Soccer League Fall Festival Tournament starting on Saturday, Oct. 24 in cold and windy conditions with occasional drizzling rain.

The Streaks played Sylvania United White first. In the first half, defensive players Alex Weaver, Kyle Ott, and Curtis Wooley kept control of the penalty area. Michael Weigand scored 19 minutes into the game. Midfielders Jack Fisher, Jared Kidder, and Austin Welch kept feeding the ball to offensive players, including Abraham Salas, Kegan Ott, and Alex Short, but there was no further scoring in the first half.

Weigand started with a goal five minutes into the second half. AJ Short, goalie, had to make a few saves in the second half. Guest player Josh Kidder scored at 23 minutes from an assist by fullback Weaver. Archbold won 3-0.

The Streaks played Napoleon in late afternoon with only one referee available. Weigand started with a goal four minutes in. Josh Kidder was pushed down in the penalty area, took the penalty kick and scored. Salas kept after the ball among a mob of players to score at 17 minutes.

Weigand scored on a penalty kick, then scored at 25 minutes. Napoleon was given a direct kick at 30 minutes and scored from the middle on Archbold’s half of the field. In the second half, Napoleon scored a little over four minutes in. Archbold struggled to play together as a team, especially defensively. Napoleon scored again at nine minutes, 15 minutes, and at 29 minutes. The game ended in a 5-5 tie.

Archbold traveled to play against Anthony Wayne White, Sunday, Oct. 25. Although the Streaks were outplaying the White team, Anthony Wayne made a breakaway and scored first at 14 minutes. The Streaks fed the ball to Weigand, who scored at 19 minutes, and sparked the team to keep hustling. Weigand scored at the 29-minute mark.

In the second half, Jared Kidder, playing center fullback, disrupted the White offense with the help of Wooley and Weaver. Welch’s midfield playing relayed the ball up to Weigand, who scored at 17 minutes and 23 minutes for a 4- 1 final. The Streaks moved up to the final match against Pacesetter Select in late afternoon.

The Blue Streaks, who play in Division 2, changed their game plan to play Pacesetter Select, who are in first place in Division 1. Archbold initially struggled with the lineup change, but needed more defense for the strong four-man offense of Pacesetter Select. Pacesetter scored at 10 minutes, then soon after for a second goal.

A two-man offense with Weigand breaking away snuck a goal in for Archbold. Pacesetter began to become more aggressive, and referees made direct foul calls against them. However, Pacesetter scored a third goal before the end of the first half.

In the second half, the Streaks struggled to fight against the aggressive play, and two Archbold players were taken off due to injury. Weigand, who took a close ball to the face, was taken off, also. However, he came back to play aggressively himself, spurring on his team. Pacesetter scored the only goal in the second half. Pacesetter won the championship 4-1.