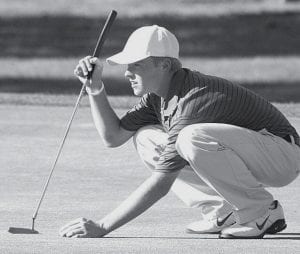 Steven Kinsman was match medalist in Archbold’s tri-meet victory over Montpelier and Pettisville, Monday, Aug. 27. He shot a 37 against the Locos and Birds, and had a 39 against Wauseon, Thursday, Aug. 30.- photo by David Pugh

The Archbold golf team beat Montpelier and Pettisville last week, but lost a close match to Wauseon to leave their record at 3-1 on the young season.

The Streaks won a tri-match with the Locos and Birds with a team score of 165, Monday, Aug. 27. The Locos finished with a 199, while Pettisville scored a 212.

“We had a very close match against Wauseon,” said Kevin Miller, AHS coach. “Wauseon left the door open, but we couldn’t quite close it.

“I’m pleased with the start of the season. We have a great bunch of guys. We’re playing a little more consistently this year than last.”

Steven Kinsman was match medalist with a round of 37. Micah Grime shot a 40, while Tyson Bostelman and Andre Hurst each shot 44s.

Other Blue Streaks and their scores: Steve Nafziger 48, Jackson Beck 50.