Blue Streak Girls Up Record To 3-0 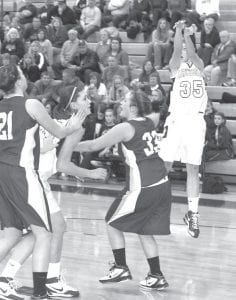 Cassidy Wyse takes a shot in Archbold’s season opener with Edgerton, Saturday, Nov. 27. The Streaks are 3-0 on the season after winning two games last week.– photo by Scott Schultz

The Archbold girls basketball team raised its record to 3-0, 1-0 in the Northwest Ohio Athletic League with two victories last week.

The Streaks traveled to Wauseon, Tuesday, Nov. 30, and came home with a 41-36 non-league victory.

“Both of us struggled on offense due to being so familiar with one another. Wauseon made a run in the fourth quarter and we had girls step up and make big free throws at crunch time.

“Alicia Drewes did a nice job hitting seven of 10 free throws in the fourth. The free-throw line was definitely a big key in the victory.”

The Streaks led 12-9 after one period and went on a 6- 0 run in the second period to go into halftime with an 18-9 advantage.

AHS led 28-17 after three, but Wauseon outscored the Streaks 19-13 in the fourth quarter to close the final gap to five points.

Drewes led all scorers with 19 points. Bailey Creager and Chelsea Cochrane led WHS (1-1) with 10 points each.

“It’s nice opening league play with a win,” said Ziegler. “We didn’t play our best game by any means, but give LC credit. They out-hustled and outplayed us in the first half.

“Good teams find a way to win when you’re not at your best, and we were able to find a way.

“I thought we had girls step up tonight and got a lot of production off the bench, which is important as we move into the rest of the schedule.”

The game stayed tight in the second half, as AHS took a 26-23 lead into the final quarter. The Streaks made 7-14 free throws in the fourth quarter for the 43-36 final.