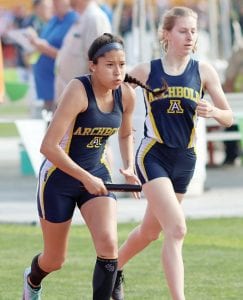 Left: Brittney Ramirez sprints away after taking the baton from Gwynne Riley in the 4×800-meter relay at the Div. III state track & field tournament, Friday, May 31. Archbold placed third in the event. Right: Kylie Sauder, left, and Riley run the final 75 meters in the 800-meter run. Sauder overtook several runners to finish fourth; Riley was seventh. There were 18 runners in the race.– photos by Mary Huber

The Archbold girls track team started the Division III State Track & Field Tournament with a third-place finish in the 4×800-meter relay on Friday, May 31.

Usually Stamm runs the last leg, but she and Sauder switched so Stamm ran the third leg and Sauder ran the anchor leg.

“It was a pretty tough race,” said Sauder, who said their goal in the race was to finish in the top three.

“Dakota thought she could run better as third and knew that I was strong at the end.

“Our first runner (Riley) got us to second, and I thought we were doing pretty good. And then we fell back a bit (in the second leg, run by Ramirez), but that’s ok.

“And then our third runner (Stamm) got us back up to third, and I knew I needed to stay there,” said Sauder. 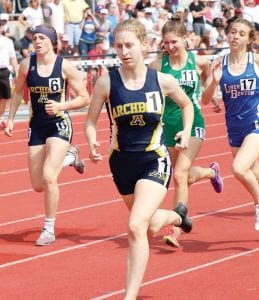 “These girls have three events (Sauder, Riley); some have four (Stamm).” Iris Pena was in two events, and Ramirez was in just one.

“They ran smart,” said Gladieux. “Yes, they’re always trying to finish first, but coming in, West Liberty was 14 seconds ahead of us and Minster was 12 seconds. That’s a lot of time.

“They still ran a second faster than they did at regionals, so yes, I’m thrilled with what they did.

“They did what they had to do to get this.”

Archbold’s first event on the second day of the state meet, Saturday, June 1, was the 4×200, with Iris Pena, Sauder, Riley, and Stamm.

“Our goal was just to do our best and put everything we’ve practiced into action,” said Pena.

“We’re pretty proud of what we have done throughout this season. We’re not disappointed or anything; we’re just proud that we did all we could to place at state.”

“I’m pretty happy,” said Sauder. “I think I was ranked fifth or sixth, and I kinda slowed the first lap a little more and took off the second ‘cause I knew I needed to go.”

“I just got way too excited that first lap and I couldn’t maintain it the second lap,” said Riley later. “It was really a downer for me, but (winning the 4×400) has just made it all up.”

Riley “ran a phenomenal time; she just got boxed in at the wrong time, where Kylie went on the outside and was able to get around it,” said Gladieux.