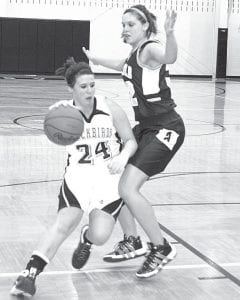 Above: Blue Streak Hailey Galvan, right, blocks Kylee Garcia’s path to the basket. Galvan had a number of blocked shots in the contest with Pettisville, which Archbold won 62-49. Galvan was also the game’s top scorer, with 20 points. At left: Erica King (32) is fouled by Betsy Wyse (11) with 1:54 left in the second period. King led PHS with 17.–photos by Scott Schultz

The Pettisville girls basketball team ran into a wall when the Birds hosted Archbold, Monday, Dec. 28.

Trying to penetrate inside, the Blackbirds, whose tallest player is 5-foot-9, kept running into 6-1 Hailey Galvan.

All the Blue Streak senior had to do was stand with her hands held high. She blocked a number of shots of the much-shorter PHS team, and led the Streaks in the scoring column with 20 points, allowing Archbold to come home with a 62-49 nonleague victory.

“This was a nice road win against a good team,” said Brian Ziegler, AHS head coach. “Pettisville is very quick and scrappy.

“We did a nice job getting the ball into Hailey, and when she got the ball she used her height advantage and was able to score.

“Another huge key was going nine for 10 at the foul line in the fourth quarter, and 14-17 for the game. Shooting free throws at that percentage can win a lot of games.”

“We didn’t finish shots and convert free throws, but I’m proud of how hard we played.”

Archbold finished the period with a 4-1 run, giving it a 28-21 halftime advantage.

Pettisville got within one, 32-31, on an Ashlyn Bontrager basket midway through the third period, but that was the closest the Birds got.

AHS led 42-37 after three periods and outscored PHS 20-12 in the fourth, including nine of 10 free throws in the final 2:50 after the Birds were forced to foul.