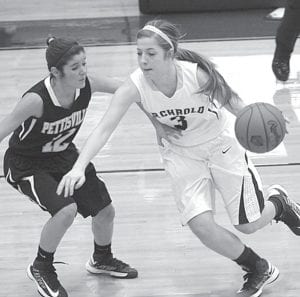 Behind Darian Oberlin’s six three-pointers and the squad’s 91% free-throw shooting, the Archbold girls basketball team (11-1) swept past Pettisville (5-4) 66-38, Saturday, Dec. 29, in the Thunderdome.

“We did a nice job playing together as a team to get the win,” said Brian Ziegler, AHS head coach.

“It started with the defensive effort, and then Darian started hitting shots. The rest of the team did a great job finding her within the offense and kept feeding her.

“Cassidy Wyse and Hannah Hesterman had nice games inside. This was a solid team win, and everyone contributed, whether it was scoring, rebounding, defense… everyone did their job.”

The Streaks trailed only twice in the contest. Pettisville’s Audra Klopfenstein hit two foul shots to open the game, and after Oberlin’s first trey, Dana Fricke hit a turnaround jumper with 4:49 left in the first for a 4-3 PHS lead.

The Streaks were up 30- 13 with 2:53 left in the second period. Klopfenstein hit a deuce and Mikala Avina hit a pair of free throws to close the gap to 30-17, but Archbold’s Cassidy Williams extended the lead back to 15, 32-17, as she drove the lane and scored with three seconds left in the half.

Archbold took a 49-26 advantage going into the final eight minutes and outscored PHS 17-12 in the final quarter for the 66-38 final.

Oberlin led all scorers with 20 points. Cassidy Wyse and Hannah Hesterman were also in double figures, as each scored 14.

Fricke was Pettisville’s only scorer in double figures, with 10.

The Streaks won the rebounding battle 29-17, and committed 12 turnovers to Pettisville’s 16.