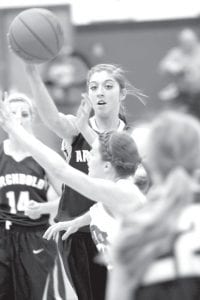 It was a girls basketball battle everyone was waiting for.

In front of a large, raucous crowd, the Streaks turned up the defensive heat to hand the Patriots their first loss of the season, 54-40.

The Streaks lead the race for the Northwest Ohio Athletic League title with a 6-0 record, and are 14-1 overall. Wauseon is right behind at 5-0, while Patrick Henry drops to 4-1, 12-1 overall.

Archbold can guarantee at least a share of the league title with a win over Wauseon, tomorrow, Thursday, in the Thunderdome.

“This was a huge win against a good team in a great atmosphere,” said Brian Ziegler, AHS head coach.

“Our guards did an excellent job putting pressure on the Patrick Henry guards. The pressure did two things: it forced PH into turnovers, which led to some offense, and it also limited the amount of times Kelsey Tietje (PH’s leading scorer) touched the ball.” 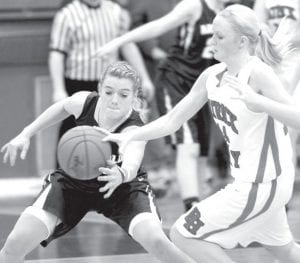 Cassidy Wyse, left, steals the ball from Patrick Henry’s Kayla Fintel in the third quarter. The AHS junior finished with 12 points in the Blue Streaks’ 54-40 victory over the Div. IV fourthranked Patriots.– photo by Mary Huber

“The first half we had way too many turnovers,” said Joe Pennington, PHHS head coach.

“I would guess we probably had more turnovers than shots pretty easily. I know in the first quarter, especially, that we just came down and they got double and triple teams coming at us.

“We kind of froze and put ourselves in some bad spots dribbling up the sidelines, and they really took advantage of it (and) got some easy baskets.

“They really got after us on the boards, too, tonight. That’s one of the things we really try and concentrate on.

“That’s where we win battles, that’s how we win games, is by getting offensive rebounds.”

PH’s Kristin Bostelman scored the first bucket of the game 29 seconds into the contest.

It was the only time the Patriots led the entire night.

The Streaks held Tietje, a senior averaging 19.4 points per game, to just four points in the first half and 12 for the game.

“She’s our leading scorer, and that’s where we look to go to,” said Pennington.

“When they came out with that pressure, we couldn’t even see her to get the ball to her. We talked at halftime about maybe trying to throw it up over top, but we still couldn’t even get the shots off to do that.”

Jesse Fidler led all scorers with 17 points. Cassidy Wyse was also in double figures, with 12.

“Jesse gave us a lift on the offensive end,” said Ziegler.

“Hannah Hesterman did a nice job on Tietje, and Cassidy Wyse had her usual solid game. Cassidy Williams gave us a huge spark off the bench.

“Everyone had a part in the victory.”

“As a team, Archbold just came out after us and did a much better job executing,” said Pennington. “Their speed kills us.

“They were more aggressive. They were a lot quicker on their missed and on our missed shots, and even when we had a checkout, someone would slide by and someone else would sneak in and get the rebound for them.

“They really took it to us tonight.”