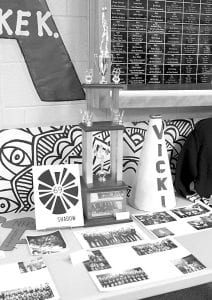 Above and below: Some of the memorabilia on display at Ridgeville Falcons Night in 2016.– photo by Mary Huber

The Archbold boys basketball team will again become the Ridgeville Falcons, Saturday, Feb. 2, against Tinora in the Thunderdome.

The Streaks previously dressed as the Falcons when they played Liberty Center on Feb. 5, 2016.

The event was wildly successful.

Allan Gladieux, AHS athletic director, petitioned the Ohio High School Athletic Association to allow the players to wear the dark blue Ridgeville basketball jerseys that night instead of the traditional white jerseys for a home game, which they wore in 2016.

The OHSAA granted the request, and the Rams agreed to wear their white jerseys.

The event honors a part of school history. The Ridgeville School District was split and consolidated with the Archbold and Napoleon districts 50 years ago, in 1969.

The Ridgeville school had been in existence since 1841, when the first log school was built. 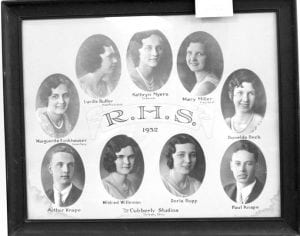 Students are encouraged to wear the blue and white colors of Ridgeville.

Just like in 2016, there will be a display of Ridgeville memorabilia, and staff and alumni will be recognized between the junior varsity and varsity games.

Anyone who would like their Ridgeville Falcons memorabilia displayed that night can drop it off at AHS anytime.

Proceeds from the sale of t-shirts will benefit the Ridgeville Community Park and F.F. Hesterman scholarship program.

The scholarship program honors F.F. Hesterman, a Ridgeville school administrator for many years.