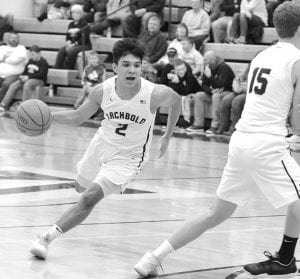 Left: Noah Gomez sees an opening and drives to the basket against Delta, Friday, Feb. 7. Right: Noah Cheney eyes the basket; the senior scored 10 points in the NWOAL victory.– photos by Mario Gomez

The Archbold boys basketball team took care of business with Delta 64-26, Friday, Feb. 7, in the Thunderdome, to set up a Northwest Ohio Athletic League showdown at Evergreen, Friday, Feb. 14.

The Streaks (15-4) and Vikings (17-1) enter the contest with identical 5-0 NWOAL records. With only one more league game remaining, the winner will claim at least a share of the league title.

“It’s gonna be a big game,” said Joe Frank, AHS head coach. “We’ll lay it on the line and see where that takes us.

“I know we put ourselves in a position for this to be a big game. Obviously, if we don’t take care of business… the game means nothing.

“Credit our kids for getting us to 5-0, but now it’s up to us to go into a hostile environment Friday night. We’ll see where that takes us.”

With the final four games of the season all on the road, the Streaks were looking to send seniors Noah Cheney, Ethan Hagans and Elijah Zimmerman off with a win in their final Thunderdome appearance.

The Streaks switched to a full-court press and stifled the Panthers defensively while going on a 17-0 run for a 19-2 lead.

“We wanted to speed them up a little bit after watching their first possession,” said Frank. “They were gonna try and slow it down… to limit possessions and shorten the game.

“We wanted to get them out of their comfort zone and try to speed them up. I thought we did a good job of that.”

The Streaks slowed the pace down offensively in the second, but maintained their defensive dominance and went into the half leading 27-8.

Cheney, Zimmerman and Trey Theobald all scored during a 9-0 run in the third to push the lead to 36-8.

Delta outscored the Streaks 6-3 over the final 3:23 of the third, trailing 39-14 heading into the final quarter.

Archbold went berserk behind the three-point line in the fourth, nailing seven of the night’s 13 treys to pull away with the 64-26 victory.

As the fourth quarter came to a close, the three seniors received a well-deserved round of applause by the Blue Streak faithful.

“All three of them are valuable assets to this team,” said Frank. “One thing I would say about those three, besides being pretty good basketball players– they’re even better people, and that’s gonna take them further in life than their basketball skills.

“(They’re) good leaders to show the underclassmen how to do things not just on the floor, but off the floor as well.”

Cheney and Theobald each scored 10.

It was cold and snowy outside Napoleon’s Grand Canyon, Saturday, Feb. 8, but the Streaks remained hot on the court, winning their eighth straight contest.

The Blue Streaks kept a good distance between them and the Wildcats (4-15) in the third, taking a 40-23 lead into the final eight minutes before going on to win 48-33.

Zimmerman and Austin Roth led the Streaks with 11 points each.

Joshua Mack and Landon Willeman led the Wildcats with 11 and 10 points, respectively.