The Archbold quartet won the 4×200-meter relay at the Division III state track and field championships, Saturday, June 5 in Columbus.

It is the first time in school history an Archbold boys relay team has won a state track title.

The Blue Streaks ran the race in one minute, 28.49 seconds.

The time broke the school record of 1:29.71, which was set just last week. 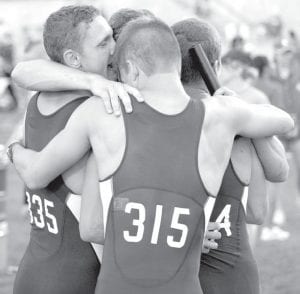 Hammersmith, a senior, was the only returning member of the 4×200 that finished fourth at state last year.

He was also on the relay in 2008 that finished sixth.

“It has been since 1968 that the boys were in the hunt for a state title.

“I don’t know if the boys realize how close we came to getting the team title. There is no doubt in my mind we are the best dual meet team in Division III.

“All the boys had a great weekend. Desmond’s third place in the long jump really got us going.

“The 4×200 was just awesome. Their time was just .02 off the state record. It was a great performance.

“Danny’s 300 hurdles was outstanding. His time was second all-time on the Archbold list and less than fourtenths (.4) off the school record. That was an amazing time for a sophomore.

Nate Hammersmith raises his baton in victory.–photo by Donald Young

“The Division III meet was extremely strong this year. It may have been the strongest meet ever in D-III.

“I thought all four guys left it on the track.

“I was really happy for Hayden Stamm. He has qualified for the state meet on three relays, and has only run on this year’s 4×400 due to an injury last year and a coaches decision this year.

“I was very happy for Noah Keefer’s effort, as he literally left it all on the track in the 4×400.

“What can you say about Nate Hammersmith’s year and career. No other athlete in Archbold history has competed in this many events at a state meet in a two-year period. 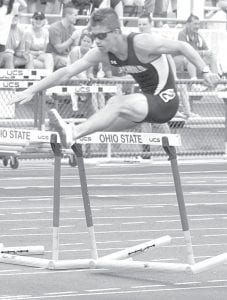 At left: Danny Young jumps a hurdle in the 300-meter hurdle event at the Division III state track and field championships in Columbus, held Friday, June 4 and Saturday, June 5. The sophomore finished fourth. Above: Desmond Sleigh leans forward to maximize his long jump. The Blue Streak junior finished third in the event.– photos by Donald Young and courtesy AHS yearbook

“Once Noah got him the baton in the 4×200 I knew he was going to bring home Archbold boys’ first-ever relay championship and only the third boys championship ever (the other two were Tom Storrer in 1967 in the pole vault and Steve Schnitkey in the high jump in 1968).

“This has been a season of many firsts for the boys, and the best thing is we return a boatload of talent for next year.”

Calen Settles, Cincinnati Clark Montessori, won with a jump of 22-5 1/4.

Young, a sophomore, finished fourth in the 300-meter hurdles. He ran the race in 39.49 seconds. 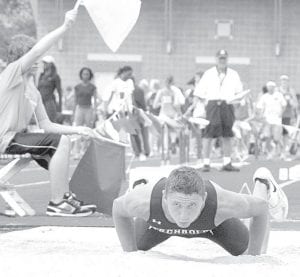 “Trisha’s performance was outstanding,” said Downey. “She broke Autumn Borton’s record in the 800 set in 1993.

“Trisha has tremendous talents, and this is her first injury-free track season.

“If we can keep her healthy, her times could be real scary next year.”

In her fourth straight appearance at the state meet and third time she qualified for the 100, Autumn Lantz failed to make the finals.

“I was disappointed that Autumn didn’t make the 100 finals,” said Downey, “but that doesn’t detract from an incredible track career.

“A four-time state qualifi er, she had a great track career.

“Our kids owe a lot to these coaches.”