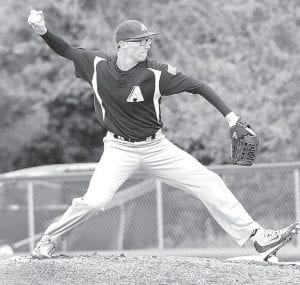 Left: Bryson Taylor got his third win in three starts when the Streaks defeated Wauseon 14-4, Monday, May 1. Right: Ian Radabaugh scores after the Indian catcher had a late tag.

The Archbold baseball team (15-5) clinched the outright Northwest Ohio Athletic League championship with a 14-4 win over Wauseon, Monday, May 1, at Wauseon.

The Streaks claimed their first NWOAL title since 2005, when they shared the title with Bryan and Delta. They went on to win the Div. III state title that year.

It was the first time the Streaks won the NWOAL title outright since 2001.

“This is a very difficult league to win in baseball. For our guys to run the table is a heck of an achievement. I’m realy proud of them.”

Archbold scored six runs in the second inning and single runs in the third and fourth to lead 8-0.

Wauseon (4-14, 2-5 NWOAL) countered by pushing three runs across the plate in the bottom of the fourth and a run in the fifth to cut the difference to 8-4. 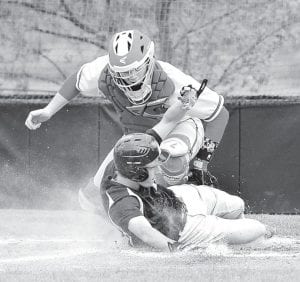 Archbold came right back, scoring three runs in each of the sixth and seventh innings for the 14-4 win and the NWOAL title.

Bryson Taylor got the win on the mound. He allowed four runs on two hits with three strikeouts and two walks in 4 2/3 innings of work to raise his record to 3-0 in just his third career start.

“Bryson Taylor is a guy that’s been under the radar,” said Selgo. “He’s really been coming on strong for us this year.

“I’m really glad to see his kind of success, because he’s kind of been in the background.

“It’s great for him, his selfconfidence, and our team to pitch like that.”

At the plate, Gabe Petersen was 2-4 with a double and four runs batted in.

Brandon Miller was 2-4 with two RBIs, Nic Rodriguez had a double and one RBI, and Bryce Williams had two singles. Archbold had 11 hits in the game. 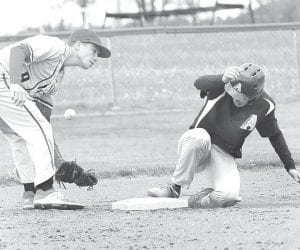 Trevor Rupp steals second base for the Blue Streaks.– photo by Mario Gomez

The Streaks play today’s semifinal winner between Evergreen and Otsego.