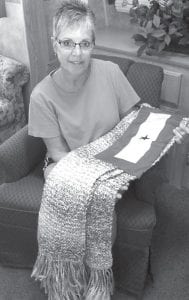 Sherryann Franks, Wauseon, holds a Blue Star banner, which is given to families who have a loved one serving in the United States armed services. She also holds a prayer shawl, which, along with a Gold Star banner, is given to families who had a loved one killed while serving in the military. Franks is active with the Wauseon chapter of the Veterans of Foreign Wars, which hosts an event to present banners to Blue Star-Gold Star families next month.– courtesy photo

In the continuation of an American tradition that dates back to WWI, there will be a presentation of Blue Stars and Gold Stars in Wauseon, Sunday, Oct. 5, 2 pm, at the Wauseon Post of the Veterans of Foreign Wars.

Sherryann Franks, Wauseon, a member of the VFW auxiliary, said the event honors families who have a loved one serving with the United States Armed Forces.

The families receive a Blue Star banner to hang in a window of their home.

The banner “serves as a reminder to the community that the family has someone serving in the military,” she said.

The Gold Star banner is given to families who have lost a family member who died in service to their country.

It is the seventh year for the Blue Star-Gold Star presentation at the Wauseon VFW.

So far, Franks said the Wauseon group has only given out 10 gold stars. None of the recipient families have been from Fulton County.

This year, a Gold Star will be presented to the family of Sonny Zimmerman, a United States Army staff sergeant who was killed in a rocketpropelled grenade attack in Mushaka, Afghanistan on July 16, 2013.

He was in his fourth tour in Afghanistan.

Zimmerman was from Waynesfield, in the Lima area.

Franks said in addition to the Gold Star banner, Zimmerman’s mother will receive an oil portrait of Sonny painted by Nora Sallows.

The family will also receive a prayer shawl made by Marty Ross of Wauseon.

The shawl has been prayed over by many people.

Franks explained during difficult times, a family member can drape the shawl over their shoulders and be enveloped in prayer.

For Gold Star families, Franks said the presentation can be part of their healing process.

The Blue Star-Gold Star banners were started during WWI, and were very popular during that time.

They fell out of favor during the Vietnam War era, Franks said.

The Wauseon presentation is one of a few Blue Star-Gold Star programs conducted in the United States.

The VFW has received national recognition for its presentation programs.

Franks said they don’t do it for the recognition.

“We do it so the parents and families know we support them, and that there is a tomorrow,” she said.