Blizzard Of ‘78 Still The Snowstorm All Others Are Measured By 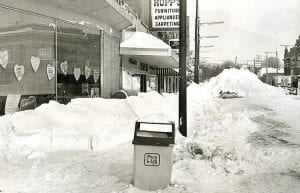 Left: Snow filled the main street of Archbold after the Blizzard of 1978. Right: Looking north from the railroad tracks after a partial cleanup.– Buckeye file photos

The Archbold area has had snowstorms and blizzards over the years, but none compare to 40 years ago, when the Blizzard of 1978 hit.

It was the fourth winter storm to hit Archbold in three weeks.

The third storm hit Jan. 16-17, 1978, when “fine snow, whipped by a gusty wind, started falling in Archbold about 9:30 a.m., Tuesday morning, and was soon drifting across highways, making driving dangerous and visibility low,” according to the Jan. 18, 1978 edition of the Archbold Buckeye.

“Temperature reading in the business area was about 10 degrees and the chill factor was lower.

“Warm clothing and heavy footwear were necessary for pedestrians to keep warm if they were outdoors battling the January storm, the third in two weeks.” 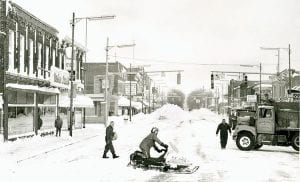 “The worst storm in the history of Archbold struck this community, Wednesday afternoon, Jan. 25, and continued for three days, paralyzing traffic, closing schools, churches, industries, and made the canceling of all public functions necessary, and isolated families in their homes,” read the Feb. 1, 1978 edition of the Buckeye.

“A total of 21 3/4 inches of snow fell in four days, probably setting a new all-time record.

“Snow started blanketing this community Wednesday afternoon, Jan. 25, and was whipped by a strong wind, velocity of which was claimed to be 70 mph for hours during the night and again on Thursday.

“The snowfall on Wednesday, measured at the Archbold Sewage Treatment Plant, was recorded at 14 inches.

“No snow was measured Saturday, Jan 28; however, on Sunday, Jan. 29, the gauge indicated one-quarter of an inch more snow arrived, making a total of 21 3/4 inches for the four January days.”

“The blizzard, a 70 mph gale, howled in from the west, and blasted this area between 12-14 hours on Thursday, making highways impassable, piling up enormous drifts that measured from 6 to 12 feet here in the village, around farm homes, engulfed highways with impassable drifts that made movement of all kinds of traffic impossible,” said the Buckeye.

“Many autos, trucks, and other vehicles left the highways, landed in ditches, along roadways and were soon completely buried under giant drifts.

“Here in Archbold, autos and trucks left parked on streets were completely covered with snow and many were not dug out until Monday and Tuesday.”

Schools were closed for a week.

“With roads impassable, and snow removal crews staggering under the terrific problem of opening streets and highways, business places and all industries were closed Thursday, Friday, and Saturday,” said the Buckeye.

The Ohio Turnpike was closed from Exit 3 (Wauseon) to Elyria with hundreds of truck drivers stranded.

“Snow was piled high everywhere; giant drifts made it impossible to get autos out of snowbound garages and entrances to homes were blocked with enormous drifts,” said the Buckeye.

“Only the brave and hardy ventured outdoors to battle the snow that engulfed their homes and isolated the premises.

“Many farmers tried to open drifted lanes and soon gave up the battle.

“Snowmobiles were in use everywhere. Stores ran out of supplies of milk and bread.

“Snowmobiles were used with neighbors pooling their needs and sending someone to get more food supplies.”

Dean Parker, Fulton County Extension Agent, said the loss to Fulton County dairy farmers was approximately $20,000 because milk had to be dumped, although farmers offered to give milk free of charge to those who could get to their dairy barns via snowmobiles.

He also estimated approximately 300 acres of unharvested soybeans were lost, about 6,000 bushels valued at $32,000.

Metal storage bins at Gerald Grain collapsed at its plant on Co. Rd. J, northwest of the Fulton County Fairgrounds. The new plant was constructed in 1977. The loss was estimated between $50,000-$100,000.

Archbold Street Department crews hauled approximately 700-800 loads of snow and dumped them north of the railroad tracks, east of the end of E. Holland St. and at the south end of the village.

The group left by bus on Wednesday, Jan. 25, to attend a hockey game. About 10 pm, the group boarded the bus, but it had motor trouble.

By midnight the bus was ready, but the blizzard had hit Fort Wayne.

The group stayed at the American Red Cross headquarters Wednesday and Thursday nights, then was transferred to Bishop Dwenger High School, where the group stayed through Sunday.

“The Archbold group was treated royally, dined in the high school cafeteria, used the gym for basketball and volleyball, and started back to Archbold Monday. It took them three hours to make the return trip,” said the Buckeye.

Sponsors were Mr. and Mrs. James Beck, Lynette and Kerry, and Mr. and Mrs. Howard J. Snyder, Rhonda and Renee.

The Archbold Fire Department was manned 24 hours a day during the storm.

Fortunately, there were no fire calls.

“Archbold firemen made runs to deliver medicine and special prescriptions to persons who were isolated,” said the Buckeye.

“Saturday, they secured and delivered a supply of eggs to the kitchen at Fairlawn Haven.

WHFD, the local FM radio station, handled over 7,000 telephone calls and messages during the blizzard.