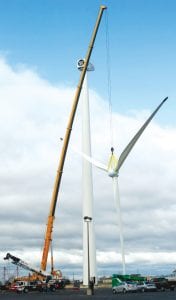 High winds and balky rigging frustrated attempts to attach the rotor (the technical names for the blades attached to the hub) on Friday, Nov. 2. Above, crews attempt to adjust how the rotor hangs in the rigging. Eventually, work was called off on Friday because of high winds. A second attempt the following day was successful.– photo by David Pugh

It took two tries, but the long-awaited installation of the blades on the Archbold Area School District wind turbine was completed early Saturday afternoon, Nov. 3.

The three 84-foot blades were delivered on Thursday, Nov. 1. They were attached to the hub the same day in the AHS parking lot south of the Archbold football stadium.

Once joined, the blades and the hub became the “rotor.”

Crews initially attempted to lift the rotor more than 200 feet, to attach them to the gearbox and generator located in the nacelle at the top of the tower, on Friday, Nov. 2.

Battling high winds, workers discovered the rotor was not hanging properly in its rigging. It had to be lowered to adjust its position.

Also, at one point, one of the blades struck the tower, but the blade was not damaged, said Aaron Godwin, school district wind consultant.

With the wind still blowing, the attempt to mount the rotor was called off at about 3 pm. 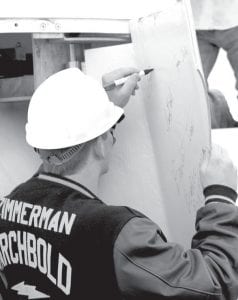 Zach Zimmerman, a member of the Archbold High School STEM (Science, Technology, Engineering, Math) Club, signs the inside of one of the covers over the wind turbine rotor hub, Friday, Nov. 2, before the first attempt to lift it into place. The cover also was signed by other STEM Club members, school officials, and school board members, among others.– courtesy photo

Godwin said the Saturday lift went smoothly, and the rotor was in place by midday.

Godwin said the wind turbine now goes into the commissioning process, which could take two weeks to one month.

During that time, the turbine’s electrical interface with Toledo Edison, village electricity distributor, will be tested.

All of the critical bolts in the turbine structure will be rechecked for proper torque specifications, and internal programming will be checked.

“They will do a lot of testing,” Godwin said.

“The community will see days when it will start up, and they’ll think, ‘oh, great, it’s working,’ (and) then it will stop,” he said.

Laura Bickel, science teacher at Archbold High School, said the original idea for an electricity-generating wind turbine for the school district was partially hers.

“In between the levy that failed in August of 2006, and we worked hard to get the levy passed in November of 2006, I presented the idea to Mr. (David) Deskins (then school district superintendent).

“He stated someone else in the community had presented the idea as well.”

Bickel said she researched school wind turbines, turning to the Spirit Lake, Iowa, district, which has had two for many years.

The research led her to Godwin.

There was a first meeting at Sauder Village in the late winter of 2007, “and the ball rolled on from there.”

Bickel said two years ago, she asked about the possibility of signing the turbine blades before putting them up.

The request remained on the back burner until just before the assembled rotor was lifted into place. Certain persons were allowed to sign the inside of one of the hub covers.

Signing were some members of the AHS STEM (Science, Technology, Engineering, Math) Club; Bickel; Joe Long, interim district superintendent; a few members of the school board; Godwin; and Krystal Naylor, who works with Godwin.

Also, Deskins’ name was written inside the cover.

Bickel said when the wind turbine project ran into delay after delay, roadblock after roadblock, paperwork problem after problem, “Mr. Deskins powered through it.”