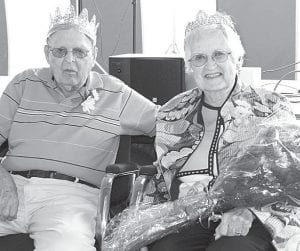 The couple met in church and started dating in February 1942. Donald joined the Navy in September 1942, and the couple married on Feb. 19, 1944, at First United Brethren Church, Toledo.

So the couple packed up their gear, including a tent, sleeping bags, and two cots, and went on a camping trip to visit those final four states.

“We’ve always had a good time together,” said Shirley.

When asked for their words of wisdom for other couples to remember, Donald had two words of advice: “Yes, dear.”