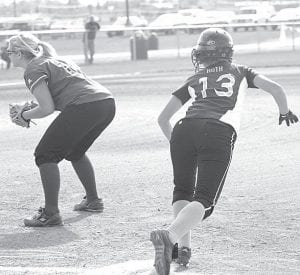 Pettisville’s Lauren Roth (13) gets ready to break for second base in the Birds’ BBC game with Stryker. Roth hit a single and a triple in the 13-1 victory.–photo by Scott Schultz

The Pettisville softball team allowed only four runs in three games last week and upped its record to 14- 2, 6-0 in the Buckeye Border Conference.

PHS hosted Stryker in Wauseon, Thursday, April 29. The Birds scored 10 runs in the second inning on their way to a 13-1 BBC victory.

Pettisville and Edgerton battled at Wauseon, Friday, April 30. The Birds scored a run in the bottom of the sixth inning for a 3-2 victory.

The Cadets (3-11, 2-3 BBC) scored their only run in the first inning. Pettisville scored single runs in the third, fourth, fifth, and seventh innings for the victory.

Delaney Nofziger was the winning pitcher. In seven innings she allowed one run on four hits, struck out 10, and walked two.

Nofziger was again on the mound. In the five-inning game she allowed one run on four hits, struck out four, and walked one.

The Birds took a 1-0 lead in the first inning, and the Bulldogs (11-7) came back and tied the score in the second.

Both teams scored runs in the fifth for a tie at 2.

With two outs in the bottom of the sixth and Ashley Eicher at first base, K. King hit a triple to send Eicher across the plate with the winning run, giving Pettisville its ninth straight victory.

Nofziger was the winning pitcher.

K. King led PHS at the plate with two singles and a triple. Eicher hit a single.