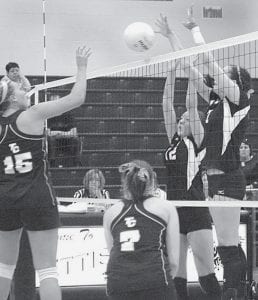 Pettisville, the number one seed at the PHS sectional, played fourth-seeded Stryker last night, Tuesday, in a district semifinal.

In the sectional final against Toledo Christian, the Birds jumped out to a 14-5 lead in the first game and were never threatened.

The Eagles got their act together in the second game. The score remained close throughout, and was tied at 21 when TC’s Bethany Critchley served an ace for a 22-21 lead. The advantage was upped to 23-21 on a Lindsay Harder kill.

The third game was much like the first. Pettisville upped its lead to 13-4 on a Katie Weber kill, and the Eagles called a time-out. The break didn’t help, as PHS upped the advantage to 17-4 before serving the ball into the net.

Toledo Christian called another time-out after Harder’s spike went into the net, giving PHS a 20-6 lead. The Eagles started to narrow the gap, and were down 23-14 when Critchley’s spike sailed out of bounds, giving the serve back to Pettisville.

The Birds held a 16-11 lead in the fourth game after Mackenzie Nofziger served an ace, and built the advantage to 19-13 on a Chelsea Schmucker ace, one of four she had in the match.

Down 23-15, Toledo Christian lost the serve when Critchley’s serve went into the net. Stephanie Yoder put the Birds at match point, 24-15, with a kill, and after a side out, she blocked a spike to give PHS the game and match.

Weber had 13 kills, while Haley Nofziger had four solo blocks. Karina Rohrer-Meck was 59/59 in setting.