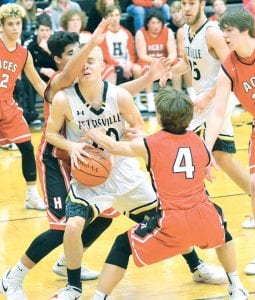 Landon Roth runs into a pair of Aces while driving to the basket. The seventh-ranked Blackbirds defeated ninth-ranked Hicksville 58-47.– photo by Mario Gomez

The Birds used home-court advantage and some timely scoring runs to give the Pettisville students and alumni a satisfying 58-47 win to move to 17-2.

“We have a lot of respect for Hicksville,” said Brian Leppelmeier, PHS head coach.

“It was a battle. They came in here tonight and played extremely hard.”

Pettisville jumped out to a 6-2 lead, but was quickly reeled back in after a Landon Turnbull three-pointer pulled the Aces within one.

Sam Rychener scored his fourth point of the quarter for PHS, but Payton Tunis drained two straight threes to push the Aces in front, 11- 8.

After exchanging buckets, Detric Yoder scored on a three-point play to tie the score at 13 to end the first quarter.

Tunis scored on a layup to start the second. Logan Rufenacht buried a three, followed by a Rychener layup, putting PHS on top, 18-15.

After Tunis stopped the run with a layup, Rychener scored and Rufenacht knocked down another three for a 23-17 lead.

Pettisville outscored the Aces 5-3 through the final three minutes of the quarter to lead 28-20 at halftime.

Hicksville went on a 9-1 run to start the second half, tying the score at 29.

Justin Rupp bookended an 11-0 run with a pair of treys to give PHS some breathing room with a 40-29 advantage.

The Aces scored the final nine points of the quarter on threes, as PHS went into the final stanza up 45-38.

Tunis hit a trey to start the final eight minutes and pull within four, 45-41, but the Aces got no closer.

After exchanging a pair of baskets, Dillon King sank a pair of free throws and Rupp dropped another three for a 54-45 lead with 3:41 left.

The Aces mustered only two more points while the Birds played keep-away the remainder of the quarter.

Canidate Vickery iced the game with four straight free throws for the 58-47 final.

“I thought our kids battled in the second half,” said Leppelmeier.

“It seemed like (Hicksville) had the momentum early. Offensively, we didn’t space the floor very well. We could have gotten a few better looks, but we couldn’t get in a flow.

“I thought our seniors really stepped up and had a nice game tonight.”

Yoder and Rupp led the Birds with 11 points each.

Tunis led all scorers with 24 points, while Turnbull added 10.

Pettisville won the rebounding battle 25-20, and committed only eight turnovers to Hicksville’s 11.