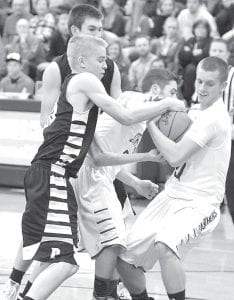 Left: Pettisville’s Landon Roth, left, fights for control of the ball with a pair of Stryker Panthers. Right: Evan King was 3-3 at the foul line against Stryker.– photos by Mario Gomez

In a game that fans will remember for years, it took 12 extra minutes to decide a winner.

It was a tight first half as Stryker took an 11-9 lead after the first quarter, but Pettisville used a strong inside game to lead 26-20 at halftime.

An announcement by the Stryker administration that football would return to the school system in the fall energized the crowd and gave the Panthers an extra bounce to their step to start the second half.

After a Dillon King threepoint play gave Pettisville its largest lead, 29-20, Stryker went on an 8-0 run to come within one, 29-28.

Caleb Rychener scored a quick basket for PHS, but a three-pointer from the Panthers tied the score at 31.

Rychener and Gabe Beck combined for nine points at the end of the quarter to help Pettisville lead 43-37 going into the final eight minutes.

Stryker came out strong in the fourth, outscoring Pettisville 12-2 for a 49-45 advantage late in the game.

Baskets by Beck and King and two King free throws with 1:07 left tied the game at 51.

Stryker turned the ball over with 17 seconds left in regulation, but Pettisville couldn’t capitalize, and it was on to overtime.

After Stryker jumped out to a two-point lead, King answered with a bucket and Rychener scored on a free throw to give PHS a 54-53 advantage.

Beck and King started the scoring in the second overtime with a bucket and two free throws, respectively.

Stryker scored a free throw to cut the difference to 60-57.

After two Beck free throws, the Panthers scored on a three-point play and a Pettisville turnover to tie the game at 62.

Beck had the final shot to win the game but couldn’t connect, and it was on to a third overtime.

Pettisville’s inside game of Rychener and King were too much for Stryker, who got outscored 9-5 in the third overtime.

Rychener had a double-double, scoring 22 points and grabbing 13 rebounds.

It was Homecoming at Pettisville, but the Hicksville Aces left with a 21- point win.

Pettisville trailed 13-11 after one, but a dismal second quarter doomed the Birds as the Aces outscored Pettisville 16-4 to open a 29- 15 lead at the half.

The Birds outscored the Aces 15-11 in the fourth, but they could only make a dent in the final, falling 58-37.

The Birds shot 40% from the field and grabbed 17 rebounds, but committed 21 turnovers.

Beck was the only PHS player in double figures, with 17 points.