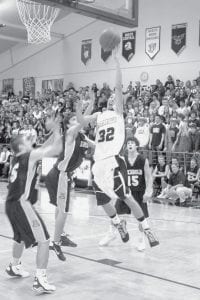 A fast start, tough defense, and weathering a late fourthquarter rally was all Pettisville (5-0) needed to upend Archbold 61-51 at the Bird Cage, Saturday, Dec. 27. 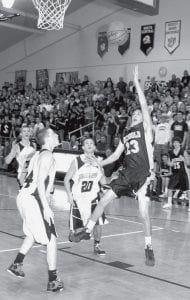 This renewal on the hardwood is in its second year. The Streaks won the contest 58-47 last season, but this year, in front of a sold-out crowd of approximately 1,200, the Birds held off a pesky Streak team (3- 4) to stay undefeated.

"Hats off to Archbold," said Greg Nofziger, PHS coach. "They brought everything they had. They played extremely hard.

"This game was something they wanted and something we wanted. We were fortunate to get out on top."

"I thought the team that won tonight deserved to win," said Doug Krauss, AHS head coach. "They did more things better than we did."

Birds Put Streaks In A Hole

The Streaks, a team looking to find that right combination on the court and facing a full-court defense, found themselves in a hole early as the Birds jumped out to a 17-5 first-quarter lead.

Settling down in the second, the Blue and Gold started chipping away at the 12-point deficit. Corey Walker drove the baseline for two and David Rupp hit a jumper, cutting the gap to 17-9.

Michael Deffely, who paced Pettisville with 20 points, finally broke the ice with a deuce to push the advantage back to 10.

AHS rattled off the next seven points, but still trailed 19-16 when Jordan Klopfenstein hit a jumper and Deffely converted a Streak turnover into two points for a 23-16 PHS lead.

Klopfenstein scored 14 points off the bench, while Quinn Nofziger added 16 in the win for the Birds.

The two squads went back and forth the rest of the first half. Pettisville led 31-22 at the break.

AHS started chipping away at the Pettisville lead to start the second half. Rupp nailed a three-pointer; Q. Nofziger answered for Pettisville.

Deffely added one from the charity stripe, and Drew Smith hit a pair at the foul line that started an 8-0 run for Archbold.

Rupp added a pair at the line, and Collin Walker spotted Rupp for two more.

Collin Walker came up with a steal and knotted the score at 36 with 1:34 left in the third.

Deffely hit on one of two from the foul line, ending the Streak run. With under 20 seconds to play in the third, Collin Walker had a chance to tie or take the lead. The AHS junior went to the foul line, but missed both shots as the period ended.

But it wasn’t the last time Collin Walker would make an impact.

With renewed energy to start the fourth, the Birds converted another Archbold turnover into two points for a 39-36 lead.

Collin Walker answered with a three from deep in the corner.

Q. Nofziger answered for PHS with a jumper.

Scoring a three to start the fourth, Collin Walker wasn’t finished. The junior added a pair at the foul line, and after Pettisville scored the next nine points, he answered again with a deuce and then a steal that he converted for two points.

Collin Walker scored 11 of Archbold’s 15 fourth-quarter points, but it was the final rally by the Birds that sealed the win.

Holding a 53-49 advantage with 1:53 to play, the Birds went 6-9 from the foul line in the closing seconds, along with another steal that was converted into two points by Q. Nofziger for the final.

"We tried to withstand the storm early," said Krauss. "Pettisville didn’t do anything we weren’t expecting; they did a great job. "We knew they would be aggressive and come off the glass and run; we just didn’t do a good job guarding it."

"We lost a lot of our defensive stoppers from last year and were able to hold David Rupp to 13," said the PHS coach. "Here is a young gentleman that can get 30 on some given night, and he will before the season is over.

"Archbold is just so wellrounded. Both the Walkers came in and did an outstanding job. That caught us by surprise a little bit.

"I have the luxury of having 11 quality kids. I kid you not; you could pull each one out of a hat to start the game and go out and finish a game. Jordan (Klopfenstein) had a good week at practice, made good choices, and took care of the basketball."

"We weathered the storm, and eventually caught up to game speed and got ourselves back into it there in the second quarter," said Krauss.

"We came back in the third and played defense a little better. I thought the key to the game was their breakaways, and that’s what they do off of rebounds. They give and go, and we didn’t respond very well."