Horning: "It's A Coach's Dream To Have A Group Like This" 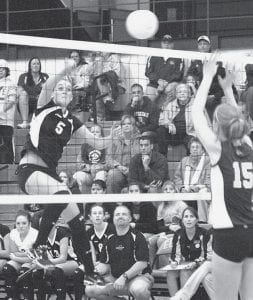 Katie Weber (5) spikes over the outstretched arms of Leipsic’s Shannon Nadler. Weber was 18/21 in attacks, including six kills.- photo by Mary Huber

Pettisville advanced to the Sweet 16 for only the third time in school history, but a team of Vikings shot the Birds down.

“I’m proud of the girls. They did a great job all season long,” said John Horning, PHS head coach.

“They came here to fight and to compete, and they reached the goal of getting here. They would’ve liked to play another one or two, but it didn’t happen.”

The Birds kept their fans cheering in the first game, keeping the score close and battling to a tie at 10. The Vikings were ahead by only one point, 12-11, when they started to take control, scoring five straight points for a 17-11 lead.

Whenever the Birds got the serve back after that they kept it for just a point at a time, and Leipsic won the first game 25- 16. 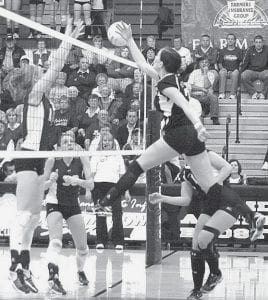 “The first game we really stepped up and played some defense,” said Horning.

“I think we got a little caught up in where we were and what was going on, and never really got anything going at the net. We had some blocks, but attack wise that goes back to our passing. It just wasn’t there tonight.”

The second game was all Leipsic, as the Vikings silenced the Pettisville faithful after jumping out to an 18-6 lead.

The PHS fans tried to get their team motivated with a standing ovation as the Birds walked on the court for game three, but the Vikings had control of the match, taking a 15-9 lead.

Abby Klinebriel served the fi- nal five points for the Vikings, ending the game with two aces to put Leipsic into the Elite Eight.

“We were playing not to lose, and against a good team like that you can’t do that,” said Horning.

“You’ve gotta be aggressive at the net, take some swings, hit it off the block, find a hole, move the ball around.

“The back row had a bad night. There were times we had a good three (good pass, good set, good kill), but we could never get those in succession.

“I don’t think we ever had to force them to make much adjustments.”

“Keely’s played since junior high,” said Horning. “Keely was a role player; she played right front for us at times.

“She’s a quiet girl, but she was very much team-focused, encouraging each other, working hard, not a bad word for anybody.

“She did a great job when she would get in, and when she wasn’t in she was there cheering and helping with stat sheets, and scouting sheets and telling our hitters where to go… a total team player.

“Karina was our hustler. She’s worked extremely hard. It’s unbelievable how much she loves the game. Being our setter, she’s run the show.

“She was a leader on the court, a leader in the locker room, and had a great team attitude as well,” said Horning.

“Haley was our go-to girl in the middle. I thought defensively this year she was outstanding; she led the area in blocks. A vocal leader on and off the court, she was great about taking girls under her wing this year. A great team attitude.”

“Katie- her smile lights up the room. She was our leaper. She can play anywhere on the court She loves the game, as well.

“She was instrumental, too, with some of the younger sophomores this year, buddying up with them, giving them rides, keeping them loose, and being that constant on the floor of hustling, strong play, great at- titude, pulling for the team, and never quitting.”

When the girls broke the huddle before the match, they shouted “one big team.”

“In my book, they’re champs. They’ve worked so hard. I don’t know if I’ve ever had a group, to my knowledge, that’s been so together on and off the court.

“It’s a coach’s dream to have a group like this, and I consider myself very fortunate and blessed.”

One of Horning’s goals was to build respect for the Pettisville volleyball program.

He appreciated the large contingent of PHS fans who traveled to Elida to support the team, and thinks the girls have helped build respect for the sport of volleyball.

“I told the girls that there was someone, who, after our win Saturday (against Antwerp in the district final) couldn’t find their little girl,” said Horning.

“She was outside with a volleyball. She was inspired by how the girls played, and thinks she can do that someday.

“So I shared that and I told them, ‘you’ve made a difference, even in that one life, the way that you have played and been together and how you represent ourselves, our team, and our school, and the sport that we have.’