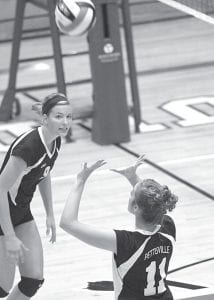 Stephanie Yoder (9), one of three Pettisville attackers at the net, watches the set of Laura Rupp (11) in the Blackbirds’ district semifinal against Edon.– photo by Mary Huber

The third time was the charm for the Edon volleyball team.

“I give Edon a lot of credit,” said John Horning, PHS head coach. “They came out right from the gates.

“I thought defensively that’s the best they’ve played us at the net, thanks to their defense. I thought they executed at the net.

“I thought we came out tight.”

Pettisville came back to tie the score at 24 on a Stephanie Yoder kill and Tessa Yoder ace. But a kill by Edon’s Jennifer VanVleet gave the side-out to the Blue Bombers, and Pettisville’s serve receive on the next play went to the net, where VanVleet stuffed the ball.

Edon led 24-18 in the second game when the Birds closed the gap to 24-22 before Sydney Stoll’s kill gave EHS the game.

PHS led 18-12 in the third game when a Bird net violation gave the side out to Edon. After S. Yoder served an ace to give PHS a 21-16 advantage, Edon called a time-out. The Birds won four of the next five points to win 25-17.

It looked as if the match might go to a fifth game when Pettisville jumped out to a 7-2 lead in the fourth.

“We had a great start to that game,” said Horning. “I really felt if we got that one we were in a good position.”

The Bombers tied the score at 16 and again at 21. A Pettisville spike went into the net, giving the point and side out to Edon. S. Yoder’s kill gave the serve back to PHS with the score tied at 22.

The Birds scored a point with a Katie Yoder spike, but a Pettisville spike went out of bounds on the next play with the score tied at 23.

VanVleet stepped up to the line and stuck her powerful jump serve on the back line, putting Edon at match point.

Pettisville’s serve receive on VanVleet’s next jump serve went to the net, and the Birds were unable to get the ball over.

“We’ve prided ourselves all year long on our serve-serve receive game, and they beat us in that today,” said Horning. “That 24th point by Van Vleet…I thought it was going out, too. She really snapped that sucker off.

“She’s not served real well against us this year. She’s a great ball player. Of the three games we played, that was by far the best game that she had played. She got ‘em to where they are right now.

“They played well. They earned it.

“They were better tonight. Defensively, I thought we had some really nice swings that they got their hands on and they sent it back over. That’s the sign of a good team.

“There was no quit in their kids, and our kids either. We maybe were shaky at times, but we never quit. We could’ve packed it in that third game.

“I thought we really came out with a lot of resilience and a lot of team chemistry as far as believing in ourselves and what could happen. We got that third game, and if we could’ve got that fourth one I would have liked to have seen what would have happened. But it didn’t happen.”

The Birds finished their season with a 21-3 mark and their first Buckeye Border Conference title since 2002.