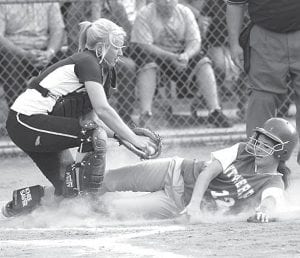 Pettisville’s Erica King tags Antwerp’s Ashley Smith for the Archers’ first out of the second inning in their Div. IV district semifinal. Smith tried to score from second after Darcie Reinhart hit a line drive up the middle.–photo by Mary Huber

The Antwerp bats came out swinging, Thursday, May 20, in a Division IV district semifinal with Pettisville at Bryan.

The Archers (17-4), ranked seventh in Div. IV by the Ohio High School Softball Coaches Association, had 10 hits in the contest, and turned a 2- 0 lead after the first inning into a 4-1 victory.

Each team scored a run in the third; Pettisville’s was a home run by Kayla King.

Leading 3-1 in the top of the seventh, Antwerp’s Haylie Foorer hit a home run that cost the Blackbirds more than the game, as Kaitlin Nofziger hit the fence and went down with an injury.

Nofziger laid on the ground for more than 30 scary minutes, and was cheered by fans from both schools as she was taken to the hospital by ambulance.

“Kaitlin is doing better today,” said Kendra Stahl, PHS head coach, on Friday. “As she was running for the ball, she ran into the fence rather hard. She was determined to get that ball. 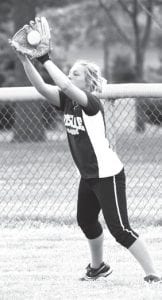 “But after she ran into it, she hurt herself and the EMS was called just as a precaution. Today she is doing much better and is walking fine.”

The Blackbirds, who ended their season with an 18-4 record, tallied seven hits and were led by K. King with a double and a home run. Erica King hit a double; Ashley Bontrager, Nofziger, Lauren Frey, and Ashley Eicher each had singles.

Delaney Nofziger was the losing pitcher. In seven innings she allowed four runs on 10 hits, struck out one, and walked one.

“We had a very solid game,” said Stahl. “We would have obviously liked to have kept going, but the girls gave it all that they had, and that’s all I can ask from them.

“I told them that they have to give 100% all of the time. If they do that and we come up short, then there’s nothing to be mad about, and that’s what happened.

“We’ve made great strides this season and it all came together last night. We just came up short.”

It was the final game for four PHS seniors.

“Lauren Roth, Ellen Roth, Erica King, and Ashley Eicher were a fantastic group of seniors,” said Stahl. “I feel honored that I was able to coach them this season.

“They each had their own style and personality to be a leader on this team. And I think our underclassmen were able to relate to them and were thankful for their leadership.

“They will be greatly missed.”