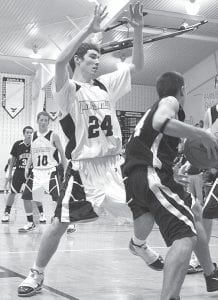 PHS traveled to Evergreen, Saturday, Jan. 23, for a nonleague contest, and lost 47- 43. It was Pettisville’s third straight loss.

The Blackbirds led 18-14 at the end of the first quarter. Pettisville held a lead through the second quarter, and was ahead 24-18 with 2:14 left in the half. Two foul shots by Austin Douglass and a bucket by Wyrick with 39 seconds left closed the gap to 24-22 as the teams headed into the locker room.

The game stayed tight throughout the second half. North Central tied the score at 30 with 3:18 left in the third, the first time the score had been knotted since early in the game. Every time Pettisville scored a basket the Eagles did the same.

Taylor Short got open at the top of the key and sank a jumper, giving PHS a 36-34 lead entering the final eight minutes.

The Eagles’ Ryan Masters tied the score on a fast break, then scored on a feed from Wyrick, giving the Eagles their first lead since the 4:50 mark of the first period.

The lead seesawed back and forth the rest of regulation.

With 46.7 seconds left Wyrick drove to the basket and was fouled. He missed the first shot and made the second, but a lane violation on NC was called, nullifying the free throw.

The Eagles got the ball back on a Pettisville turnover, but Masters’ shot at the buzzer missed, sending the game into overtime.

Short led the Birds with 16 points, including the team’s four three-pointers. Zane Miller and Jacob Rupp added 14 and 13, respectively.

Wyrick led all scorers, with 22.

Pettisville trailed 13-11 after one. The Birds outscored the Vikings 12-10 in the second to knot the score at 23 at halftime.

PHS built a five-point lead at the end of the third quarter for a 39-34 advantage entering the final eight minutes.

Evergreen (10-1) held the Birds to just four fourthquarter points while scoring 13 for the 47-43 final.