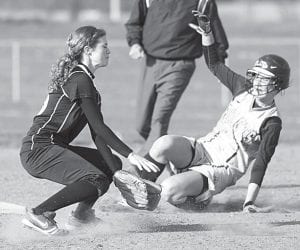 A Pilot beats the throw to Lexie King at second in Pettisville’s non-league contest with Ayersville, Thursday, March 29.– photo by Mary Huber

The Pettisville softball team went 1-2 in its first week of the season.

The Birds traveled to Wauseon, Tuesday, March 27, for their season opener.

PHS scored four runs in the first inning and held off the charging Indians 9-8.

The Blackbirds hosted Ayersville, Thursday, March 29. All PHS home games are at Biddle Park in Wauseon again this season.

Pettisville traveled to Montpelier, Friday, March 30, and came home with an 11-4 loss.

Delaney Nofziger was the winning pitcher. Throwing a complete game she allowed eight runs on eight hits, walked three, and struck out six.

The Birds scored four runs in the top of the fourth for an 8-0 lead, but the Indians came back in the bottom of the inning with five runs.

Wauseon closed the gap to one, 8-7, with two runs in the bottom of the fifth.

Both teams scored a run in the seventh for the 9-8 final.

The Pilots led 2-0 after one and 3-0 after the top of the third, but Pettisville scored twice in the bottom of the third to close the gap to 3-2.

Ayersville scored twice in the fourth for a 5-2 lead. Pettisville scored in the bottom of the inning for a 5-3 difference.

Two runs in the seventh gave the Pilots the 7-3 final.

Nofziger was the losing pitcher. In seven innings she allowed seven runs on 11 hits, struck out three, and walked one.

Kruse and Bontrager both hit doubles for PHS.

Two runs in the first and six in the second inning gave the Locos a lead the Birds could not overcome.

Nofziger was the losing pitcher. In six innings she allowed 11 runs on eight hits, struck out four, and walked seven.