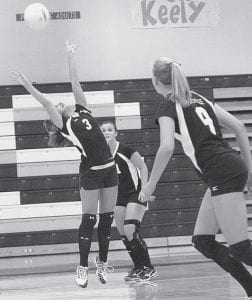 Pettisville lost consecutive matches to Evergreen and Edon before turning it around to beat Hilltop in girls volleyball action last week.

Pettisville was 46/51 in serving and 59/70 in serve reception in the non-league loss. Mackenzie Nofziger served two aces.

Haley Nofziger had seven solo blocks. Chelsea Schmucker, Stephanie Yoder, and Stacey King each had one.

Weber and H. Nofziger each had seven kills; Schmucker and S. Yoder each had five.

H. Nofziger led the PHS attack with 13 kills. Weber and S. Yoder each had nine; Schmucker had eight.

The match between the Birds and Cadets started the second round of BBC play. Pettisville also won the first match in three games.

S. Yoder led PHS in kills, with 10. A trio each had seven: Weber, Schmucker, and H. Nofziger.

Schmucker had two solo blocks; S. Yoder and King each had one.