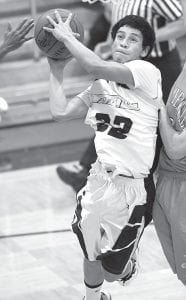 David Reyes (22) gets fouled by Ayersville’s Jared Lamb on a fast break in the second half of Pettisville’s non-league game with the Pilots, Tuesday, Feb. 8.– photo by Mary Huber

Pettisville stands 8-9, 4-4 in the Buckeye Border Conference after wins over Hilltop and Hicksville and a loss to Ayersville last week in boys basketball action.

The Birds hosted Ayersville, Tuesday, Feb. 8, for a non-league game that was rescheduled from Saturday, Feb. 5. The Pilots jumped out to a 17-6 first-quarter lead and never looked back, winning 55-41.

The Blackbirds were on the road, Friday, Feb. 11, to Hilltop High School. Pettisville outscored the Cadets 19-6 in the second quarter and 27-8 in the third for a 64-40 BBC victory.

Back on the road, Saturday, Feb. 12, the Birds traveled to Hicksville for another non-league contest. Down 34-31 after three, Pettisville hit 12 of 14 foul shots in the final period to squeak out a 53-50 victory.

The closest the Birds could get in the second half was a six-point difference, 36-30, midway through the third period.

The Pilots won the rebounding battle, 24-22.

Trevor Reamsnyder was the only Cadet in double figures, with 11. Hilltop dropped to 2-14, 1-7 BBC.

The Aces folded in the final period under 86% free-throw shooting by the Birds.

Short led PHS with 16 points, including converting seven of eight shots at the foul line in the final period. Rupp scored 13 in the game.

The Pettisville Homecoming game has been rescheduled for Friday, Feb. 18, when the Birds host Stryker in a BBC contest.