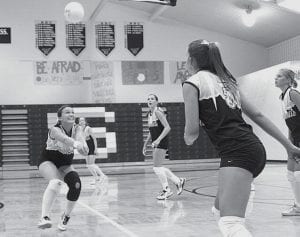 The Pettisville varsity volleyball team dropped two matches last week to fall to 1-3 on the season.

Ayersville had a 15-10 lead when Sarah Mutchler stepped to the line to serve. She served five straight points for a 20-10 lead before finally serving long to break the string.

Down 24-15, Pettisville’s Jordan Riegesecker served an ace, but then served it out to end the game 25-16.

The Birds struggled in the second game, getting down 13-1 before Haley Nofziger slammed a kill to get the serve back.

The Birds turned things around in the third game, keeping the score close. After tying the score at 7 the Birds allowed the Pilots to take 12-7 and 18- 12 leads.

PHS scored four of the next five points to close the gap to 19-16. Another Henrie kill tightened the score to 21-18, but kills by Ayersville’s Sondra Dunn and Kim Comden sealed the match.

“The word for tonight was ‘heart,'” said John Horning, PHS coach. “We’ve struggled the first three games with consistent play. We knew Kristen Nicely was going to be tough to play.

“One of our goals for tonight was to block her and to make her work for every point she got. Even when balls got through, we were trying to dig them up.

“By that third game I thought that was probably the best ball we’ve played so far. In a loss, I couldn’t be more happy.”

The Birds missed 12 serves and were 46/56 in serve reception in the loss to the Indians.

Henrie and Nofziger each had three solo blocks. Rohrer-Meck was a perfect 41/41 in sets.

“As a coach I’m happy with how they’ve prepared for the season,” said Horning. “I’m a little disappointed with some of the mental blocks we’ve got going…balls hitting the floor, communication. The girls just need to trust each other and play ball.

“I want more out of them, and they definitely want more. It’s just a matter of working hard in practice, good fundamental skills, talking on the court, and setting up some good habits so when we get on the court it’s just natural.