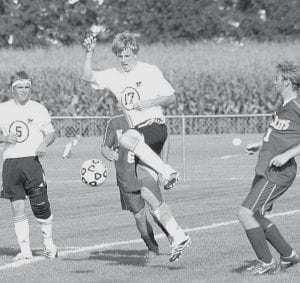 Pettisville’s Jordan Lemley (17) gets control of the soccer ball while Clay Norris (5) waits to assist in the Birds’ game with Miller City, Tuesday, Aug. 28.- photo by Scott Schultz

The Pettisville varsity soccer team started its season, Monday, Aug. 20, with a 9-1 win at Rossford. The Birds traveled to Toledo to face Maumee Valley Country Day, Thursday, Aug. 23, and came home with a 4-1 victory.

To finish their first week, the Blackbirds traveled to Anthony Wayne to do battle with the Generals, but lost 7-0.

On a field with less-than-desirable conditions, five Blackbirds scored in a balanced attack.

Quinn Nofziger had three goals, Phillip Roth contributed two goals and one assist, Jordan Klopfenstein added one goal and two assists, Aaron Rupp had one goal, and Clay Norris had one assist.

Pettisville goalie Andy Switzer was subbed out of the goal and scored twice in the last 10 minutes.

The lone Rossford goal was scored off a defensive breakdown, with the ball eventually being chipped into the goal.

Pettisville came out strong, out-possessing the Hawks for the entire game. The scoring consisted of two rallies to Nofziger, who had little trouble beating the keeper.

After a series of passes, Klopfenstein added to the lead with a shot just inside the 18-yard line into the right side of the goal.

Toward the end of the game, Switzer hit a long punt, which bounced once and then was accidentally headed into the goal by a Hawk defender.

Pettisville was unable to stop Anthony Wayne’s offense despite a strong defensive effort. The Generals had little trouble with numerous breakaways and hard shots on goal.

PHS mustered only one shot, by Nofziger, the entire game.

Emotions were high as both Norris and Richard Nyce, PHS coach, received yellow cards, but Pettisville once again was unable to score.

Miller City started off the scoring in the first half with a hard shot past the PHS keeper. The Wildcats scored again in the second half with a header off a corner kick.

Pettisville found the net off a Nofziger breakaway, but the Golden Bear offense scored off a breakaway, a shot to the right corner of the goal, a shot that bounced through the arms of the keeper, and a defensive mistake in letting an unmarked player run through the box to score.