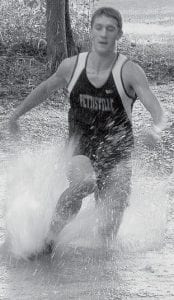 Alex Frey splashes through a ditch on the cross country course in a tri-meet at Mary Jane Thurston State Park. PHS won the boys meet; the girls were third.- courtesy photo

The Pettisville cross country teams competed at the Delta Invitational, Saturday, Sept. 15. The boys team grabbed fifth place out of 20 teams; the girls were seventh out of 17 teams.

Delta won the boys race with a score of 73 points. Wauseon won the girls race with 41.

On the boys side, Alex Frey was the first Blackbird across the line, completing the 3.1- mile course in 17 minutes, one second for seventh place out of 203 runners. Teammate Austin Borton was on Frey’s heels, taking eighth in 17:03.

Josh Villalovos was the fifth Blackbird runner, completing the course in 19:51 for 90th.

Both teams ran in a tri-meet with Otsego and Lakota at the Mary Jane Thurston State Park, Tuesday, Sept. 11.

The PHS girls team finished third with 64. Lakota won with 19; Otsego had 49.

The course was wet and muddy, and at one point runners had to run through a ditch where water was over their knees. Times for all runners were slower due to the challenging course and wet conditions.

Tom Wagner, PHS coach, said the wet and muddy course at Mary Jane Thurston Park was “mostly fun for the runners. They will remember that muddy race for a long time.”