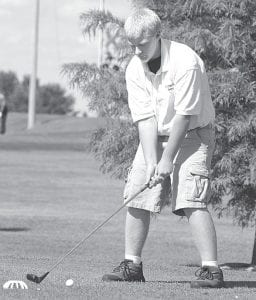 Jalen Danler led NC with a 40 while Bryce Ely had a 41. The 42 by Dylan Hutchison and 49 by Josh Kinsman proved more than enough to send the Blackbirds to their 12th consecutive loss.

Tyler Herschberger was the Pettisville medalist for the 12th straight match with a 54. Luke Meller had a 57 and Torin Blosser, a 59. Brittany Stilwill, in a tuneup for the girls sectional tournament, had a 60.

Tinora’s return to Wauseon on Thursday, Sept. 23 was a return to the site of its 2010 Green Meadows Conference golf tournament championship on Wednesday, Sept. 22.

The course, and opponent, both proved hospitable as the visiting Rams beat Pettisville 186-239.

The 50 by Herschberger was the only score below 60 for the Blackbirds. Meller had a 61 while Stilwill and Angela Austin had 63s.

The Rams were led by Nate Olson’s 45 and pair of 46s by Stephen Yackee and Mike Overmeir. Kyle Smay added a 49.

“We just can’t get any consistency,” said Ed Bracken, Pettisville coach. “Every time I think it’s coming together it breaks apart.

“I think the team is putting too much pressure on themselves. They are trying so hard to make things happen they aren’t relaxed enough to let good things happen.”