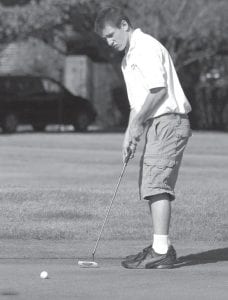 NC’s Brandon Turner led all golfers with a 41; teammate Clayton Vandervoorde was a stroke behind at 42.

Tyler Herschberger, a sophomore, led the Blackbirds with a 51. No other Pettisville golfer broke 60 except Torin Blosser, a senior, with a 58.

“It is always frustrating to lose, especially by over 50 strokes,” said Ed Bracken, PHS coach. “We’ve been struggling all year to put up some good scores.

“We just can’t get away from those one-mistake-perhole that costs us two or three strokes.

“For example, Tyler hit a ball out of bounds on the eighth hole and took a six. That means he had a par on his second ball.

“That shows his capabilities and, I think, it applies to the rest of the team. If we can just stay away from those mistakes we’ll score better.”

Fayette handed PHS its second lopsided loss of the week, 176-232, on Thursday Aug. 26 at Wauseon.

Four Fayette golfers shot in the 40s. Riley Martin led the visitors and the match with a 41. Kevin Ferguson had a 43; Chase Hookstadt, 44; Jon Boesger, a 48 to round out the Eagles’ scoring.

Blosser had a team-best 55 for the Blackbirds. Zach Kempf shot a 56 and Angela Austin, a 57.

“Nobody likes to lose two matches like we did this week,” said Bracken. “Fayette hammered us just like NC did. But there are some things that encourage me.

“Hershey (Hershberger) couldn’t play, and his being there would have improved our score. We got Zach (Kempf) some different clubs. He was hitting the ball better, and it showed with an improved score.

“Angela Austin is only a freshman playing in her first match, and, after a nervous start, played well and shot one of her best scores from the men’s tee.

“We still have a month until the BBC tournament. If we keep improving and keep knocking strokes off, just maybe we’ll surprise some teams like Edon or Hilltop.”