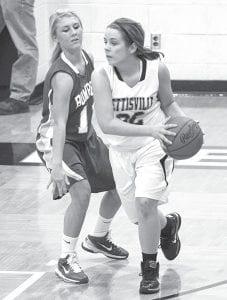 Lauren Frey (32) drives around an Edon Blue Bomber, Thursday, Feb. 3. The Birds control their own destiny in the BBC. If Pettisville wins at Stryker on Thursday, the Birds and Panthers would tie for the league title with 8-2 records.– photo by Mary Huber

Using a 23-5 third quarter advantage, the Pettisville girls basketball team raised its record to 7-2 in the Buckeye Border Conference with a 63-34 victory at Hilltop, Thursday, Feb. 10.

To win a share of the league title, the Birds must defeat Stryker, tomorrow, Thursday, at Stryker. PHS won their first meeting 53- 41 in overtime, Friday, Jan. 14.

The loss dropped the Bombers to 6-3 in the BBC.

In the matchup with Hilltop, Pettisville led 12-9 after one period and 18-16 at halftime. The 23-point explosion in the third period was followed with a 22-point fourth.

“We did not rebound or finish shots in the first half,” said Jason Waldvogel, PHS head coach.

“We started controlling the boards shortly into the second half and changed the momentum of the game.”

Also in double figures was Tanner Hostetler, with 11.

Sam Lilemon was Hilltop’s only player in double figures, with 10.

The Cadets committed 32 turnovers, while Pettisville had only 12.