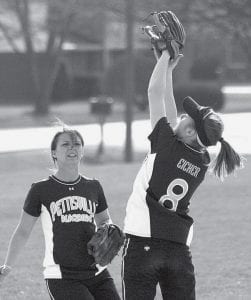 Blackbirds in the infield: Karina Rohrer-Meck watches Ashley Eicher catch a fly ball for Pettisville. The Birds are 5-7 on the season.- photo by Scott Schultz

The Pettisville softball team opened last week with an 11-4 Buckeye Border Conference victory over Edon, Monday, April 21. The Birds went on a road trip to Continental, Tuesday, April 22 and came home with a 12-2 loss.

PHS was on the road again, Thursday, April 24, and came home with a 6-3 BBC loss to North Central.

The Birds closed the week with a 9-7 victory over Tinora, Friday, April 25.

Jordan Riegsecker was the winning pitcher.

Edon had 12 hits while Pettisville had nine. Drew Lantz led PHS at the plate, going 2/3 with a double, triple, and three runs batted in. Continental 12, PHS 2

The Pirates led 3-2 after one inning and 4-2 after three. Continental scored six in the fourth and two in the fifth for the 10- run margin of victory.

Karina Rohrer-Meck led PHS at the plate, going 2/3 with 1 RBI.

Pettisville scattered seven hits in the game. Lantz was 1/3 at the plate, including an RBI triple.

The Birds led 1-0 after one inning, but the Rams took a 2- 1 lead after two. PHS tied the score at 2 with a run in the bottom of the fourth.

The Birds took a 4-3 lead in the fifth, scoring two runs to Tinora’s one, then took control with five in the sixth for a 9-3 lead.

The Rams scored four in the top of the seventh for the 9-7 final.

Pettisville had 13 hits in the contest. Rohrer-Meck was 3/3 at the plate, including 2 RBIs and a stolen base.